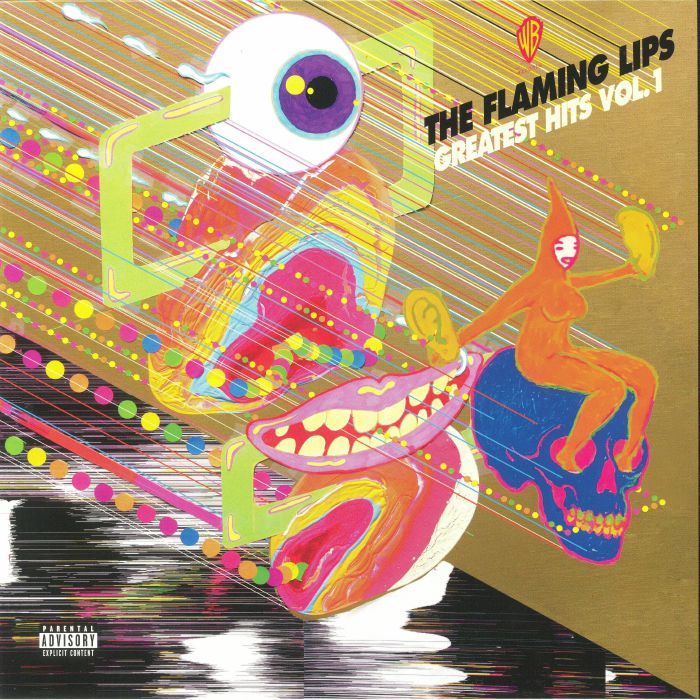 ‘Greatest Hits, Vol.1’, Warner’s attempt to sum up 25 years of The Flaming Lips in three-quarters of an hour, is both unnecessary and inadequate.

Given that they’ve been around for well over three decades and have been signed to a major label for a quarter of a century, it’s hard to believe that there’s never been a formal greatest hits or ‘best of’ release for The Flaming Lips until now. The Oklahoman collective’s commercial peak of the early Noughties, when they memorably appeared on ‘Top of the Pops’ along with Justin Timberlake dressed as a dolphin, may have waned some time ago, but they’re an incredibly unlikely band to have even had a ‘commercial peak’ in the first place. Evolving from ferociously noisy, acid-fried psychedelic rock in the mid-Eighties to transcendent, life-affirming masterpieces at the turn of the Millennium, taking in everything from Christmas albums and track-by-track Pink Floyd tributes in between, Wayne Coyne and his faithful lieutenants Michael Ivins and Steven Drozd have been creatively challenging themselves and their audience for longer than virtually anyone else out there.

The basic problem with Greatest Hits, Vol.1 is that it makes little to no attempt to tell that story. Even calling it ‘hits’ is a strange decision, as they never really released that many singles. In fairness, the first eight years (and four studio albums) of their career is missed out because they hadn’t yet signed to Warner (though that’s dealt with by a new exhaustive Rhino compilation Seeing The Unseeable), but still, the standard edition’s 11-song tracklisting isn’t terribly imaginative or representative of The Flaming Lips on anything deeper than the most superficial level. It also isn’t arranged chronologically, in a way that would have actually demonstrated the evolution of their artistry during the Warner years. Furthermore, it accentuates the radio hits over the deepest and purest cuts, meaning the new listener only gets a fleeting glimpse of half a story.

The earliest track represented is 1993’s deliriously silly single ‘She Don’t Use Jelly’ (still The Flaming Lips’ biggest radio hit after it was used on MTV smash ‘Beavis And Butt-Head’!). 1995’s lovely Clouds Taste Metallic gets two inclusions, as does 2005’s puzzling At War With The Mystics – although ‘It Overtakes Me’ is frustratingly overlooked in favour of the ham-fisted anti-Bush protest ‘The Yeah Yeah Yeah Song’. 1999’s fin-de-siècle masterpiece The Soft Bulletin is represented only by its two singles, the heaven-sent ‘Race For The Prize’ and the gorgeously mellow ‘Waitin’ For A Superman’, although the album was so full of highlights that they could have been a bit more imaginative. Zaireeka, the stupendously user-unfriendly 1997 record that required four CD players to play each of its discs simultaneously, is for obvious reasons ignored completely.

The Flaming Lips’ latter years are dealt with in similar fashion. 2002’s wonderful breakout record Yoshimi Battles The Pink Robots sees the title track (and the Lips’ highest-charting single ever) included, as well as the awe-struck ‘Do You Realize???’, but there’s no place for the philosophical ‘Fight Test’, a serious oversight. 2009’s Embryonic, a timely reinvention and re-establishment of first principles, and 2017’s enjoyable Oczy Mlody get a moment each, but 2013’s genuinely fascinating The Terror is unmined for this compilation, which is a disappointment.

Perhaps a band as stunningly creative as The Flaming Lips isn’t suitable subject for a ‘greatest hits’ exercise like this, as nobody can summarise their career in 45 minutes. But even the most short-term of existing Lips fans could probably put together a more edifying and revelatory running order than Greatest Hits Vol.1, and it certainly pales in comparison to the dozens of playlists curated by hardcore fans on streaming services. At best, it’s a passable document to own on vinyl. The deluxe edition available on streaming platforms, at 52 songs and nearly four hours, is far more in-depth and unearths a number of rarities and deep cuts that could have been used to pad out the standard edition. Without these insights into the soul of The Flaming Lips, Greatest Hits Vol.1 feels both unnecessary and inadequate. (4/10) (Ed Biggs)

Listen to Greatest Hits, Vol.1 by The Flaming Lips here via Spotify, and tell us what you think below!