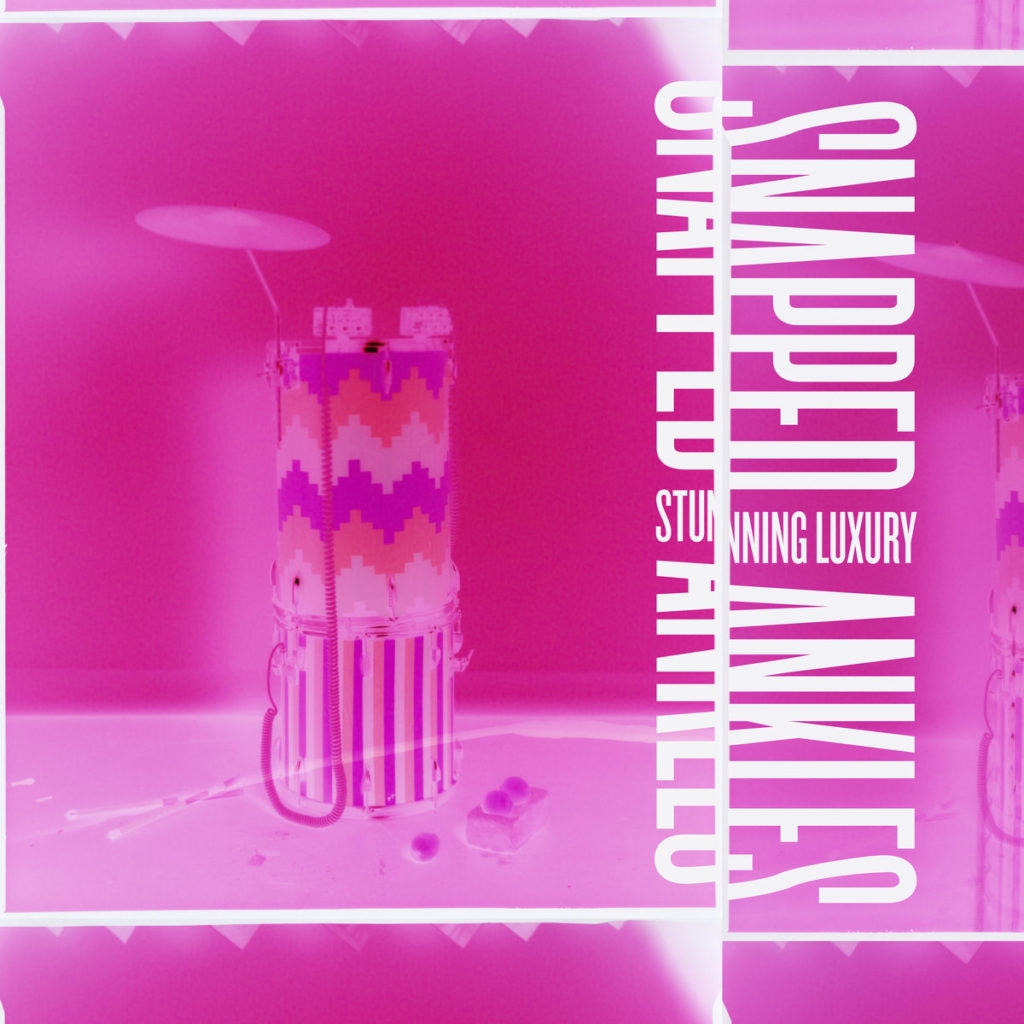 There’s a moment around ten minutes into Snapped Ankles’ sophomore record Stunning Luxury where the listener enters a state of incongruous bliss; drums are pounding, electronics are whirring, whilst the echoing and anarchic vocal of their as-yet-unnamed frontman seep into your brain where they remain for hours on end. This is the bombastic world of Snapped Ankles, where it feels reality is just an abstract state of mind.

From the opening noise-infused drones of ‘Pestisound (Moving Out)’, to the polyrhythmic ‘Delivery Van’, this is an album bursting with ideas and is a constant thrill. In the former, the track flows magnificently from a Demdike Stare-meets-Faust noise into a series of otherworldly psychedelic melodies. On the latter, there is a pronounced influence of Congolese group Konono no.1, which eventually turns into an atypical attempt at jagged post-punk reminiscent of early Talking Heads. At its core that’s what this is: a post-punk record, with a few detours along the way. ‘Letter From Hampi Mountain’ rhythm section is fairly standard in its delivery, but with the distorted vocal and frantic electronics, it turns into an entirely different being.

There’s a physicality to Stunning Luxury which is engrossing. Single ‘Rechargeable’, featuring nods to the likes of New Order, takes life some two minutes into its five-minute runtime, after its pulsating grooves and percussion would leave most in a pool of sweat. The standout moment is a highlight on the record as its industrious and raw energy whips one into a state of animalistic euphoria. Still, for all the elation which surrounds the record, there is still time for tranquillity during the closing moments of ‘Dream And Formaldehyde’, a stunningly simplistic sound which emphatically highlights all that is unique about the Snapped Ankles project.

Stunning Luxury is an intrinsically interesting album which encapsulates many wonderful ideas in its relatively short running time. No singular idea is given time to foray its way into one’s mind, instead the music invites you into the realm of Snapped Ankles; and what a world it is. By not being from this planet, they can (and do) do whatever they like – lyrically taking shots at the geopolitical climate throughout its 44 minutes, it’s as if the modern world is just a concept. Simply put, this is a record which works; from its continual cult-like grooves through to its hypnagogic close, Stunning Luxury is pure escapism. (8/10) (John Tindale)

Listen to Stunning Luxury by Snapped Ankles here via Spotify, and tell us what you think below!