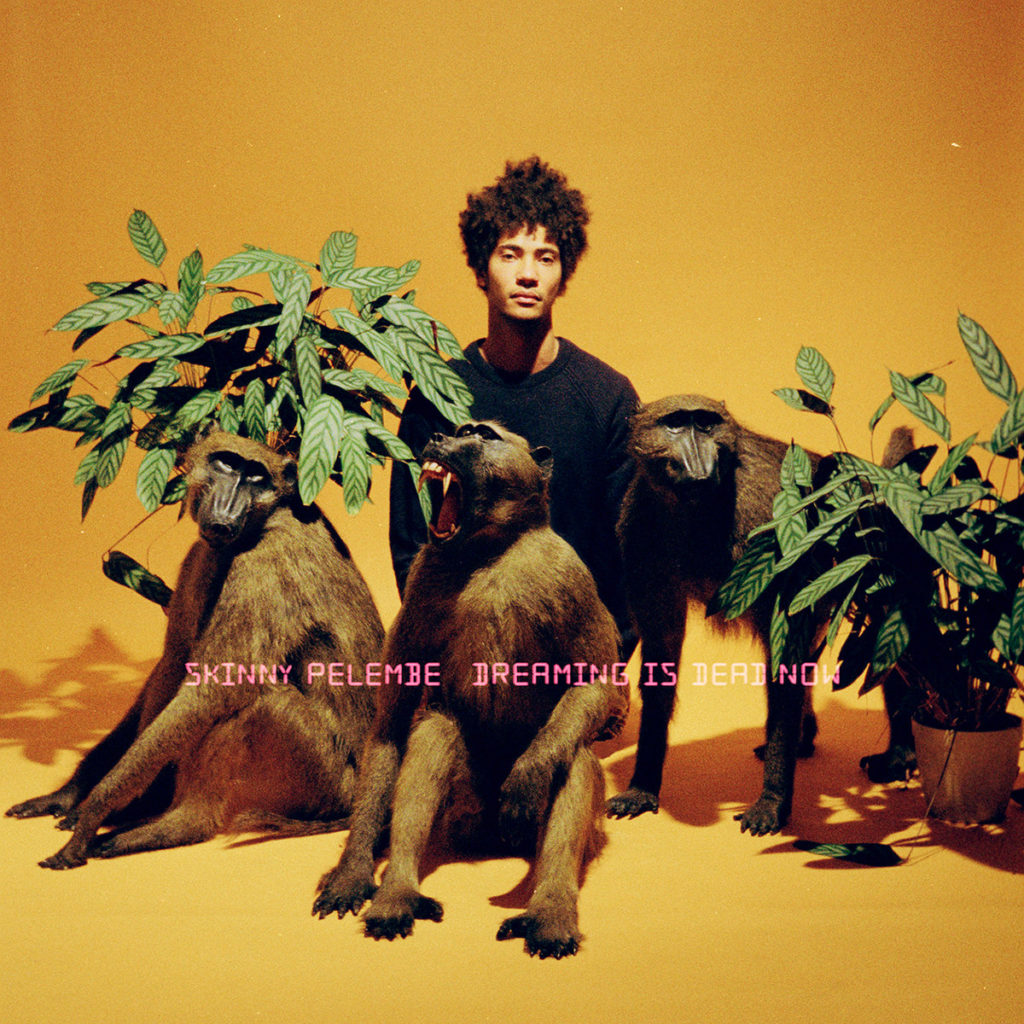 Simmering with longing that spills into different shades of calm and anger throughout, Skinny Pelembe’s debut album Dreaming Is Dead Now is a sprawling audio experience of dub, soul, psychedelia and many other stylistic influences, blending together to create a both soothing and menacing record of personal tales sung through the haze of production. A multi-instrumentalist born in Johannesburg but raised in Doncaster, and nurtured as a creative by Gilles Peterson’s Brownswood Recordings imprint, Skinny Pelembe – real name Doya Beardmore – is a master at creating musical soundscapes that seep into one’s pores and unconscious mind. After his Brownswood debut EP Sleep More, Make More Friends, named with the fact that Beardmore often uses sleep as a creative tool in mind, the artist known as Skinny Pelembe was dubbed as one to look out for by the music press, and into our hungry gobs goes the simmering sonic beast that is Dreaming Is Dead Now.

Throughout the record, Beardmore’s low and grounding voice is the centrepiece. Atop a moving drum beat, he sings about the trivial and the significant with the touch of magical realism on the opener ‘Gonna Buy A Car Today’. It gives off a laid-back feel that seems to come with a specific creative confidence, which is one of Skinny Pelembe’s defining qualities as a songwriter, inspired by drum ‘n’ bass, trippy folk, Madlib and My Bloody Valentine alike.

There is certainly a dream-like quality to the record, implied both in the name and in the flowing nature of the Skinny Pelembe sound. Echoing beats, layered reverb-y backing vocals and the borderline surrealistic lyrics on the title track ‘Dreaming Is Dead Now’ soothe, although the artificial voice at the start adds an unsettling tinge. ‘Spit/Swallow’ is the poppiest piece on the record, with an upbeat guitar riff that goes hand in hand with the beat, and suavely grooves under Beardmore’s voice. ‘I’ll Be On Your Mind’ is welcoming in its warm guitar and playful xylophone, Beardmore’s baritone rapping about a crimson kiss while it fizzes in and out whilst the beat stays stable and present. The rhythm on Dreaming Is Dead Now is ironically the only stable thing here, always keeping up the structure, whilst the vocals and other melodic components swirl and wander in tasty fashion.

Despite sounding effortlessly chill, ‘I’ll Be On Your Mind’ turns menacing and scary at the end, as if a storm rages, just like on ‘Ten Four, Good Friend’ where the instrumental truly growls and sprawls as if the sky and earth is having a strong word with one another. Afterwards, ‘Laxmi Flying’, a track featuring a choir and barely anything else apart from a slight drone, takes over with the image of the Hindu goddess of wealth. The vocal experimentation here almost reminds one of the avant-garde music of Meredith Monk, dominating the sonic field with nothing but a wall of strong voices, lyrics kept to a bare minimum. ‘Blood Relations’, the closing track, also has an unsettling feel to it, featuring a chopped-up Skinny Pelembe encounter of the poet Sam Batley.

It’s all a bit hazey despite keeping the listener on their toes as a certain heavy undertone prevails, but a real edge can be felt on one of the record’s lead singles ‘No Blacks, No Dogs, No Irish’, ruminating on the racial actualities of Britain from Beardmore’s own experience, without a wagging finger, but with a quizzical look at the differences felt between cultures and people alike. The dub is strong with this one, begging to be danced to yet retaining a sad quality.

There’s a strong sense of romance and nostalgia on Dreaming Is Dead Now, whether it’d be the abstract lyricism narrating Doya Beardmore’s life after his father’s death, or the instrumentals resisting constriction of classic strong structures and acting independently of one another. This is not a pop album per se, but one could find solace in its many layers and the honeyed tone of his voice, all the while appreciating the high production quality of the record. (7/10) (Aiste Samuchovaite)

Listen to Dreaming Is Dead Now by Skinny Pelembe here via Spotify, and tell us what you think below!