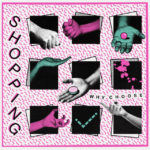 Front cover of ‘Why Choose’

East London three-piece Shopping, consisting of singer Rachel Aggs, Billy Easter and Andrew Milk, have that most elusive and vanishingly rare quality in modern music: that immediately detectable sense of ‘band as gang’. Their funky, punky 2013 debut Consumer Complaints was entirely self-released, and its small-scale, localised success has earned them a promotion to Fatcat Records, an indie with a more nationwide clout. From the minute you plunge into second full-length Why Choose, it feels as though most of the musical revolutions of the last 35 years have simply not made an impression on Shopping at all.

The way that Aggs’ cheesewire guitars, Easter’s elastic bass lines and Milk’s frantic, uptight drums interlock, it feels as though it’s come straight from the C86 tape, almost self-consciously DIY. Not promising, on the surface of it, to make something so in thrall to one aspect of pop history. But far from being pale revivalists, there’s something unmistakably essential about their sound. The fact that their anti-capitalist diatribe emanates from East London, the battlefront of so many of the campaigns against the process of gentrification that’s squeezing even modestly-waged earners out of the capital, makes their aesthetic – confrontational, yet spirited and melodic – really belong in 2015.

The spindly, angular post-punk of ‘Wind Up’ typifies the approach, but Shopping are careful to communicate their meaning clearly and make their music as accessible as possible while remaining true to their oeuvre. From the headlong charge of ‘Straight Lines’ to the slower, more explorative ‘Sinking Feeling’, there’s not a single moment that isn’t being propelled by some irresistible rhythm that will have you moving at least some part of your body. That old trope of ‘music you can dance and think to at the same time’, used to describe Bloc Party and Maximo Park over a decade ago, is being revived once again, but there are very few practitioners as great as these guys. On the exceptional ‘No Show’, the qualities of new-wave fluidity and post-punk spikiness are resolved perfectly into a modern template. Aggs’ forceful yet tuneful hollering draws obvious comparisons with The Slits, but the almost Chic-esque execution of the guitars on the likes of ‘Private Party’ means that Shopping aren’t afraid to colour outside the lines occasionally, and hint at other genres that don’t seem as compatible on the face of it.

Their bright, clear and yet complex arrangements, with their sense of existential urgency, recall Gang Of Four’s seminal debut Entertainment! at the height of post-punk. Aesthetically, as well as musically, the mighty Go4 is an apt comparison to use when analysing Shopping, as they deal with the same questions nearly four decades apart. Just like Entertainment!, Why Choose is an impassioned howl of individuality from a generation that, for their entire lives, has been bombarded with messages of individuality as expressed through branding, spoken in the language of advertising, with the true self co-opted in the process. It should not be surprising that they couch their rebellion in the same language (the titles’ Why Wait’ and ‘I Have Decided’, and even their goddamn name, have connotations of consumerist choice), because it’s likely to be the only one they’ve ever known.

Besides, the joy of taking the slogans of modern consumerism, of brands that now speak to their customers, and turning them against it, should be obvious to anybody. When Aggs sings “I wanna do it my way” on ‘Why Wait’, it works as a critique of male-dominated hierarchies as well as of capitalism, or indeed democracy, in general: with major companies or the political process, you’re free to choose as long as it’s on the list of pre-approved options. True freedom, in fact, is illusory. The question that Shopping pose is: what does it really mean to be an outsider in this context, to not participate in the process and emerge with one’s credibility intact? They wrestle with this angst intelligently throughout Why Choose – but equally importantly, you can dance to it at the same time. (9/10)

Listen to Why Choose here!