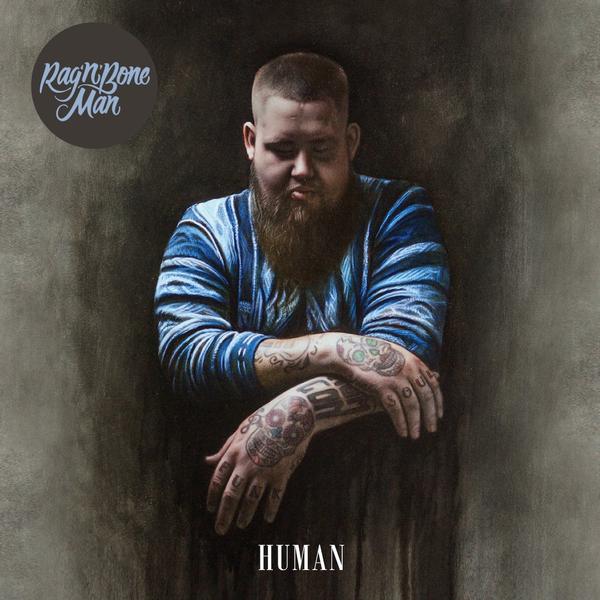 The industry has talked the talk on behalf of Rag’n’Bone Man, but Rory Graham can truly walk the walk with his impressive and soulful debut ‘Human’.

Before the release of his debut album Human, Rag’n’Bone Man (born Rory Graham) released a few EPs of which all display his influences growing up. Both of his parents were singers and songwriters that introduced him to the likes of folk artists like Joni Mitchell and blues artists like Muddy Waters; the latter of which has had the biggest impact on his voice. Later, he discovered that he also fancied hip-hop artists such as Roots Manuva and even heavy metal bands like Tool. Such diversity and appreciation of these influences have certainly made his debut something for the listener to rave about.

Human incorporates stories told by those close to the man himself but also throwing in his own experiences. Of course, he’s not the first artist to do so but the delivery of his colossal and booming vocal work will propel your emotional senses into overdrive. What’s even more impressive is the simplistic yet effective lyricism that he invokes with unbridled passion and flair; a trait featured in the old-time blues brought back 60 years later and which Graham now carries the torch for in the popular music industry of today.

The self-titled track the debut is a magnificent introduction to what Rag’n’Bone Man is about. Sometimes people cannot give answers to those who have problems and need guidance – is the message the listener gets from ‘Human’ with lyrics “Because I’m not no prophet or messiah / You should go looking somewhere higher” and the catchy “Don’t put the blame on me”. The aptly-titled ‘Innocent Man’ describes an anecdote about someone being put away for a crime they didn’t commit. This track starts off with a tasty bassline that blends beautifully with the mountainous voice that follows and then the chorus whirls it all together into audible majesty.

‘Be The Man’ is where Rag’n’Bone Man brings his hip-hop influence to life as the drum beat is not too dissimilar to that of artists like Wu-Tang Clan. ‘Ego’ follows a similar recipe where we see the main man, around the two-minute mark, do a bit of light-hearted rapping where the listener can tell that he has read the hip-hop lyrics instruction manual front-to-back; despite the fact he does not follow entirely in pursuit of major hip-hop artists. The lyrics “Bang, bang baby now you fall / Ancient wisdom know-it-all” exemplifies a rebellious nature that can be linked to hip-hop songwriting and makes ‘Ego’ one the greater songs on this album.

A quality that Human possesses is the ability to maintain the listener’s concentration through all 18 tracks on this LP. It wouldn’t be prudent to not at least mention the final two songs ‘Wolves’ and ‘Healed’; two cool and suave album-closers. ‘Wolves’ unleashes a seemingly dramatic and tense American West vibe with an innovative use of animal sounds in the chorus towards the end of the song. The incredible use of backing vocals on ‘Healed’ is the last thing that resonates through the listener’s veins as the album draws to conclusion.

But what are Rag’n’Bone Man’s stand-out moments on this album? The song ‘Arrow’ instantly springs to mind with a mesmerizing and addictive chorus – “All your love keeps me in chains / Just like the river I’ll come back again / All your fear keeps me right here / You’ll be the arrow”. Then there’s ‘Die Easy’ where no instruments are necessary except the main man and a microphone. A breath-taking two and a half minutes of sensational vocals that leaves the listener in eye-widening awe and amazement.

It is genuinely difficult to find anything that is even slightly disappointing with this album. Human is a stupendous tribute to himself and to his friends and family. Rag’n’Bone Man experiments with blues and hip-hop to forge an astonishing debut. It is no wonder that the BRIT Awards 2017 have nominated him the Critic’s Choice Award and the Best British Breakthrough Act Award; both of which he is more than qualified for. (8/10) (Harry Beynon)

Listen to Human here via Spotify, and tell us what you think below!