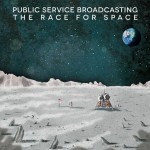 Front cover of ‘The Race For Space’

Inform-Educate-Entertain was one of the most distinctive releases from 2013, made of up of public service audio clips, and interweaved with choppy riffs and electronic interludes; Public Service Broadcasting’s second release shows that they aren’t a one trick pony. The core elements of their debut remain. Archived audio clips from the British Film Institute mix with a plethora of moody rhythms to boost the emotional resonance of the theme, which on this new record is focussed on re-telling the Cold War space race of the ‘60s.

The album soars through emotions and genres alongside a number of poignant events throughout the space race period. Drawing on inspiration from film releases, Gravity and Interstellar, the opener sees JFK’s “change and challenge” speech accompanies by a moody, choral string section.

‘Sputnik’ is one of the heavier electronic elements of the record, lending its self to some of the Chemical Brothers previous work. ‘The Other Side’ is the most gripping track of the record, concerning the Apollo 8 mission which lost contact with Houston whilst passing the far side of the Moon. The duo let the mission control clip do the work in building the atmosphere and tension, then successfully build upon that with instrumentation. ‘Gagarin’ fuses afrobeat with an eruption of a soul-funk horns, and this experimental bent is reflected further by the addition of Smoke Fairies on ‘Valentina’.

In the cluttered and samey world of guitar music in 2015, Public Service Broadcasting have a USP, and The Race For Space highlights how they can create so much emotion from very little. With much more focus than their debut, this is a wonderful return and achieved with great sensitivity. (8/10)

For fans of: Gang Of Four, The Go! Team, British Sea Power, The Beta Band