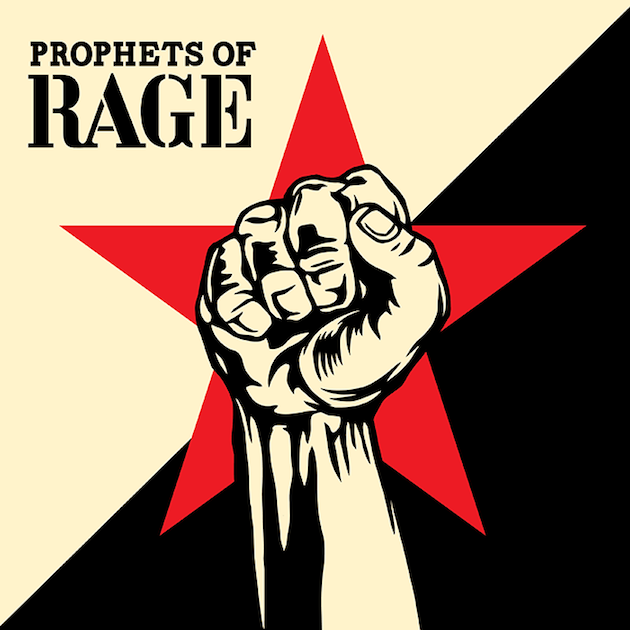 Chickenfoot, Them Crooked Vultures and Black Country Communion are just a few of rock’s awe-inspiring supergroups that have come about in last decade or so. Today, it’s Prophets Of Rage that are in the rock’n’roll spotlight. Tom Morello, Tim Commerford, and Brad Wilk of Rage Against The Machine and Audioslave still continue their ambitious rap rock extravaganza to give fans a voice in fighting back against the malevolent establishment. But it’s the figures joining them this time round where proceedings get even more ecstatic. Hip-hop titans Chuck D and DJ Lord, frontman and turntablist of Public Enemy, and Cypress Hill’s B-Real are the new prevailing sensationalists for this burgeoning project that’s finally yielded a self-titled debut album. The name of the group derives from the second to last track on Public Enemy’s seminal 1988 album It Takes A Nation Of Millions To Hold Us Back. As the listener will discover, it’s a match made in heaven!

Chuck D, DJ Lord, and B-Real are no strangers to rock/metal collaborations. Back in the early ‘90s, acclaimed heavy metal outfit Anthrax and Public Enemy joined forces on ‘Bring The Noise’ that can be found on Anthrax’s Attack Of The Killer B’s. Supposedly, this contributed to, if not initialised, the nu-metal movement due to the song’s unprecedented mix of hip-hop rhythms and thrashing guitars and drums. Similarly, in the film soundtrack for Judgement Night (which only has a 31% rating on RottenTomatoes), Cypress Hill worked with Sonic Youth and Pearl Jam. In fact, the entire soundtrack is a rap rock/metal affair. What makes Prophets Of Rage different, and more importantly better than said collaborations, is not only the crisp production, Commerford’s groovy basslines or Morello’s swirling guitar effects, but the messed-up political climate of the last year or so.

Every politicized subject under the sun is covered on this album: governments, racism, police brutality, poverty, and more than anything else: revolutionary politics. The aptly named first single ‘Unfuck The World,’ released back in June, was accompanied by a thought-provoking music video that literally displays everything wrong with the world but with much emphasis centred on the United States, with clip after clip featuring President Trump. The lyrics “No hatred / Fuck racists / Blank faces / Times changing” hardens the groups ardency towards extreme prejudice. B-Real’s line “Politicians spew lie after fucking lie” does sound tiresome of what the listener forlornly knew already to be true but is necessary to bind Prophets Of Rage’s hip-hop and rock fanbases together. Chuck D and B-Real’s combined recalcitrant personas, that postulate an emotional flare and hype in a similar degree to their early ‘90s hip-hop albums, are omnipresent on ‘Unfuck The World’ and on the entirety of Prophets Of Rage.

The opening track ‘Radical Eyes,’ with its clever play on words, sees Chuck D fabricating a society of surveillance and limited privacy and freedom for its citizens (“Now you wanna blame me for what I read / When I’m home down away from ducking your drones”) – much like George Orwell’s novel 1984. The chorus “They didn’t hear my cries / They said ‘Fuck my crisis’” can be interpreted as politicians belittling people who disagree with them when they have genuine societal concerns. Morello’s distinguishable guitar sounds are just as superlative and unique as they were back in the days of Rage Against The Machine. Prophets Of Rage never stops injecting the group’s embroidering depiction of reality.

During their ‘Make America Rage Again Tour,’ a chunk of their concert proceeds went to several charities that tackle homelessness in the US. Consequently, this inspired their single ‘Living On The 110’ that goes into some detail about the hardships of poverty. The so-called 110, as described by an outraged Morello, is “a freeway in Los Angeles and living beneath it are thousands of homeless people. Bentleys and Rolls Royces roaring by are literally driving on top of the poor and their makeshift homes, a picture-perfect analogy for the grotesque economic inequality that plagues our times.” Here, Prophets Of Rage use the power of their music to make us see what politicians refuse to acknowledge is happening in their communities.

By far the most musically prominent effort in the tracklisting is ‘Hail To The Chief’. Chuck D and B-Real’s voices in the chorus are particularly rambunctious and defiant; Morello delivers one his most career-defining riffs to date and DJ Lord and his turntables are more conspicuous. ‘Take Me Higher’ and ‘Fired A Shot’ goes back to more classic hip-hop style instrumentation with sirens in the latter seemingly mimicking a violent police encounter.

Whether you supported Trump, Clinton, or Sanders in the US Election last year: this album can be enjoyable for anyone with any political stance. Judging by Prophets Of Rage’s numerous interviews, it is clear that it’s predominantly Morello (wearing his comical ‘Make America Rage Again’ hat in the interviews) and his heartfelt criticisms and views that shape the album’s iconoclasm. Prophets Of Rage is not merely an album to rap along or headbang to, it’s an insightful and philosophical political statement from the people to the establishment. (8/10) (Harry Beynon)