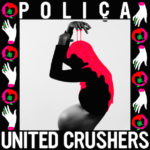 Having been recorded whilst vocalist, Channy Leaneagh has been expecting the birth of her second child, Poliça have returned after nearly a three year break with their third studio album, United Crushers. Although the Minnesota quintet have retained the infectious synthpop tones demonstrated during their previous two records, United Crushers introduces a newfound rawness that suitably accompanies the album’s murky composition.

It seems that Ryan Olson’s production values have taken a back seat in comparison to previous albums. The familiar digitally enhanced echo that has previously forged Leaneagh’s mystique vocal has been abandoned leaving an audibly superior authenticity. This is perhaps deliberate when considering United Crushers’ topical content. “It’s all shit, it’s all shit, it’s all shit” certainly sets the mood in opening track, ‘Summer Please’. An eerie depiction of impending chaos that fittingly addresses the prevailing dismal reality of the western world.

Lead single ‘Lime Habit’ introduces Leaneagh’s substituted organic vocal and they seem to drift gracefully above the cosmically toned atmospherics created by the whining synth. ‘Wedding’ deals with the recently troubling issue of police brutality, and the accompanying music video features a scene where Leaneagh, who is accompanied by two Muppet companions, explains police brutality to a small group of smiling black children. “All the cops want in / saying hands up, the bullets in” preludes the chilling cry of the escalating pitch that shapes the chorus.

The latter section of the album deals more closely with human emotion, a subject that Poliça have explored in great depth on the previous two records. ‘Lately’ is fundamentally a love song about being afraid of love. A fluctuating synth accompanies the desperate cry for help portrayed through Leaneagh’s heart-rending vocal. The tone is far from lifted with the arrival of ‘Fish’ and then is completely submerged by the harrowing bass and disjointed beat of ‘Berlin’. If you’re looking to escape the winter blues, then this is not the album for you.

It’s almost heartbreaking to fathom that an album as bleak as United Crushers was written whilst carrying the emerging essence of life in a mother’s womb. Police brutality, emotional distress and the looming implosion of the western world, this does not sound like the dialogue of a parent praising the potential opportunities that awaits the world’s new arrivals. United Crushers evokes hopelessness and is devoid of any optimistic drive, and is perhaps sadly Poliça’s most honest work yet. (6/10)

Listen to United Crushers here, and tell us what you think below!