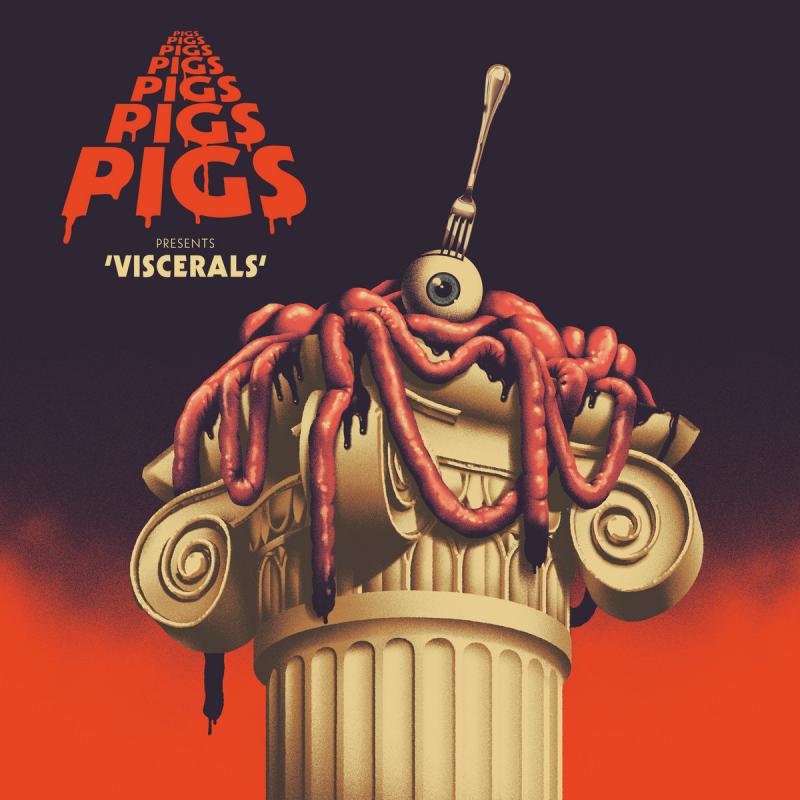 Packed full of massive, hard-hitting riffs and mesmerising noise, Viscerals is the sound of a leaner, more vicious version of Pigs Pigs Pigs Pigs Pigs Pigs Pigs, taking their experimental approach further than their debut King Of Cowards. Their second album sees the Geordie five-piece create a much more focused collection of songs that manage to hit harder and always keep you on the edge of your seat, awaiting the next booming riff to hit you in the face and completely discombobulate your senses.

Viscerals kicks off with a one-two punch of ‘Reducer’ and ‘Rubbernecker’. Fusing their fuzzed-up Motörhead-esque guitars with dissonant feedback and heavy sludge, the first two tracks kick you in to gear. These opening tunes really outline the rhythmic and melodic skills that Pigs x7 have, with rubbernecker incorporating a beat skipping groove and reducer chopping between varying tempos seamlessly. If they somehow didn’t do the trick, the seven-minute jam of ‘New Body’ immediately hits you with one of the hardest riffs on the album. It overflows with a massive sense of helplessness as frontman Matt Baty repeatedly cries “I don’t feel a thing!” Later in the track, that helplessness delves deeper into a dissonant concoction of noise with the heavy riff still pumping along.

‘World Crust’ gives an example of Pigs x7’s desire to catch the listener off guard, with confusing rhythmic changes, leaving you wondering what turn they’re going to take next. We see an opposite approach in song ‘Crazy In Blood’, where we get a glimpse of a rare vocal hook and a less drastic approach of experimentation. This is something we can also find in ‘Rubbernecker’, showing that the band are not just a band slashing ridiculously between riffs and are in fact capable of much more nuance. Indeed there’s a healthy sense of experimentation, peaking with wondrous prog-metal epic ‘Halloween Bolson’. The outro, much like ‘New Body’, feels as if you are literally being punched consistently in the face – its bloody brutal – and again, rhythmically intriguing. The album finishes with perhaps a more upbeat tune in the form of ‘Hell’s Teeth’, ending with the lyric “we’re cursed, lets rock”, which perfectly sums up Pigs x7.

Visercals has seen a massive leap in confidence, adventure and sheer intensity, way beyond the pulverising one-riff workouts of their earlier albums. The band, whose first record consisted of three songs totalling 30 minutes, have moved to a more traditional approach in keeping all songs bar three under the five-minute mark. For some this may seem as part of the beauty of a Pigs x7 record, having super long pseudo-jams, has been lost, but Viscerals has probably seen some of their best work, just restrained and condensed into much smaller chunks. (7/10) (Ali McCarthy)