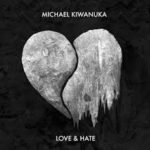 After an unusual four year hiatus riddled by much squabbling among artists hoping for a collaboration, (most notably, Kanye West) Michael Kiwanuka has finally, once again, found himself standing beneath the limelight with the release of his recent album, Love & Hate. Following up his Mercury-nominated, soul-folk debut Home Again, Kiwanuka returns armed with a far more accomplished production team than usual with British producer Inflo and Brian Burton (aka. Danger Mouse) leading the ranks. With this in mind, Love & Hate’s soul-centred revival takes a much bigger and far more intricate structure than what Kiwanuka has previously built.

Having presumably been inspired to take the album’s name from Leonard Cohen’s revered Songs Of Love And Hate, Kiwanuka’s second record remains to revolve around his interest in religious and spiritual belief. However on the second time round, the addition of social and racial discontent infuses into mix with the lonesome, social commentary of lead single, ‘Black Man In A White World’ being a tight, modern interpretation of what Kiwanuka has referred to as “slave music”. There’s also a definite cinematic feel to the record as well with opening track, ‘Cold Little Heart’ and third song, ‘Falling’. Both tracks involve a substantial degree of orchestral force layered behind what can almost be described as David Gilmour-esque guitar licks, particularly during the five-minute opening sequence.

Kiwanuka’s soulful and expressive vocal warms each track and colours Love & Hate’s sound accordingly through its obvious diversity and power. The album’s tendency to oppose the often-bleak vocal commentary with groove-like and infectious rhythm works timelessly throughout and will perhaps be Kiwanuka’s desired vehicle capable of driving himself and his music’s message right in the midst of mainstream attention. (8/10)

Listen to Love & Hate here via Spotify, and tell us what you think below!

Another refinement of a very well established style, John Dwyer's…