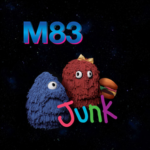 Having spent the entirety of the noughties dwelling in the musical hinterlands, sculpting critically acclaimed but modest-selling albums under the name of M83, Anthony Gonzalez unexpectedly found massive exposure with ‘Midnight City’ five years ago, a transcendent piece of retro/electro pop that got used as the soundtrack for the BBC’s Olympic Games coverage, ‘Made In Chelsea’, and countless adverts on top. Trust me, you know that song. Its parent album, the shapeshifting double-LP pop fantasia Hurry Up, We’re Dreaming, was also ecstatically received as the boldest and most commercial undertaking M83 had ever attempted, having excelled in beautiful, wordless tone poems in the past (see 2003’s Dead Cities, Red Seas & Lost Ghosts and 2008’s Saturdays = Youth for the best examples).

However, Gonzalez responded to ubiquity not by cashing in but by taking his time, temporarily mothballing M83 to do soundtrack work, composing the score for 2013’s Oblivion as well as individual commissions for the Divergent franchise and ‘The Vampire Diaries’. Still, ‘Midnight City’ looms large, and his seventh album is the first time that an M83 record has been actively anticipated, with a public to please. Gonzalez has eventually come up with Junk, which he has conceived of as a rejection of the modern music scene, dominated by playlists and in which grand album arcs and narratives are eschewed in favour of instant gratification. Gonzalez rather grumpily detailed all this in a recent Pitchfork interview, in which he also bemoaned the increasing blandness of music aimed at children via kids’ TV shows, remembering the vividness of music on ‘70s and ‘80s programmes and saying he meant the new album as “a tribute to those old-fashioned shows”.

So, a grandly conceived nostalgia trip it is then. But the central problem with Junk is that this is all it is, and nothing more – it scans too much as a personal love letter, in which ideas and themes are replicated faithfully but never improved upon. Unlike Daft Punk’s 2013 masterpiece Random Access Memories, which refracted the music of the duo’s childhood through their unique prism, or even M83’s direct predecessor Hurry Up, We’re Dreaming, there’s no real filtering going on here, no personal signature, and it badly affects the second half of the album in particular.

Trailing single ‘Do It, Try It’ was promising, laying out a smorgasbord of indulgent piano, pings of bass and disco twangs in an enjoyably chaotic fashion. It promised a maximalist, neon-coloured blowout of pop, soul, disco and electronica, but the resulting 55 minutes tend to drag, dwelling for far too long on their ideas. Guest singer Mai Lan, who pops up on four of the 15 tracks, does a lot to hold proceedings together with her enjoyably sing-song voice, particularly on the cheeky ‘Bibi The Dog’ or the horn-decorated piano ballad ‘Atlantique Sud’. ‘Go!’ is a lovely piece of kaleidoscopic pop, replete with ‘70s rock guitar noodlings, while Beck’s turn on ‘Time Wind’ bolsters the ‘80s plastic pop replication and battles hard to improve the dull, anonymous second half of the album.

The clear centrepiece is ‘Moon Crystal’, a shorthand for the kind of aesthetic Gonzalez is aiming for here – with plinky-plonky keyboards and strings, it sounds uncannily like the theme tune for some lost TV show of the ‘70s, an ideal reflected in the deliberately tacky ‘Button Moon’-style cover art. The cinematic instrumental ‘Solitude’, complete with keytar solo, comes close. Susanne Sondfor makes some deeply clichéd lyrics (“no matter how far apart we become / you know that I’ll still hear your song”) seem incredibly romantic on ‘For The Kids’, a string-swept interlude whose moves you know instinctively like the back of your hand.

This is where Junk sometimes works brilliantly – it’s incredibly well-worn territory, but when Gonzalez injects his loving tributes with the right amount of ambition and execution, the results are magnificent, like your heart’s about to burst with wonder (like Hurry Up, We’re Dreaming’s melancholic masterpiece ‘Wait’). But it happens frustratingly rarely here, and the record completely peters out of momentum by the final third. There are simply too many slow-paced, dejected pop pieces like ‘Laser Gun’, ‘Road Blaster’ and ‘Walkway Blues’ to retain the listener’s interest – meaning, ironically, that Junk is an apt title, best enjoyed by scavenging the best parts and putting them in a playlist.

Adjectives commonly associated with M83 are ‘wistful’ and ‘epic’, but there’s not so much of that here. For all the impeccably observed pop moves, Junk never really goes on the meandering flights of fancy that have made previous records so enduring in their appeal, and Gonzalez opts to play things down the middle, aping the sounds but not doing anything with them. Instead, it’s a Frankenstein’s Monster of influences stitched together, like Super Furry Animals’ early material but without the crucial sense of playfulness that made it work. Doubtlessly, it was fun for Gonzalez to make, and done with all the love and care in the world, and it could even be his most honest, personal and straightforward LP yet. But it misses out the crucial ingredient of invention, so that passion never really rubs off on the listener. (5/10)

Listen to Junk here, and tell us what you think below!