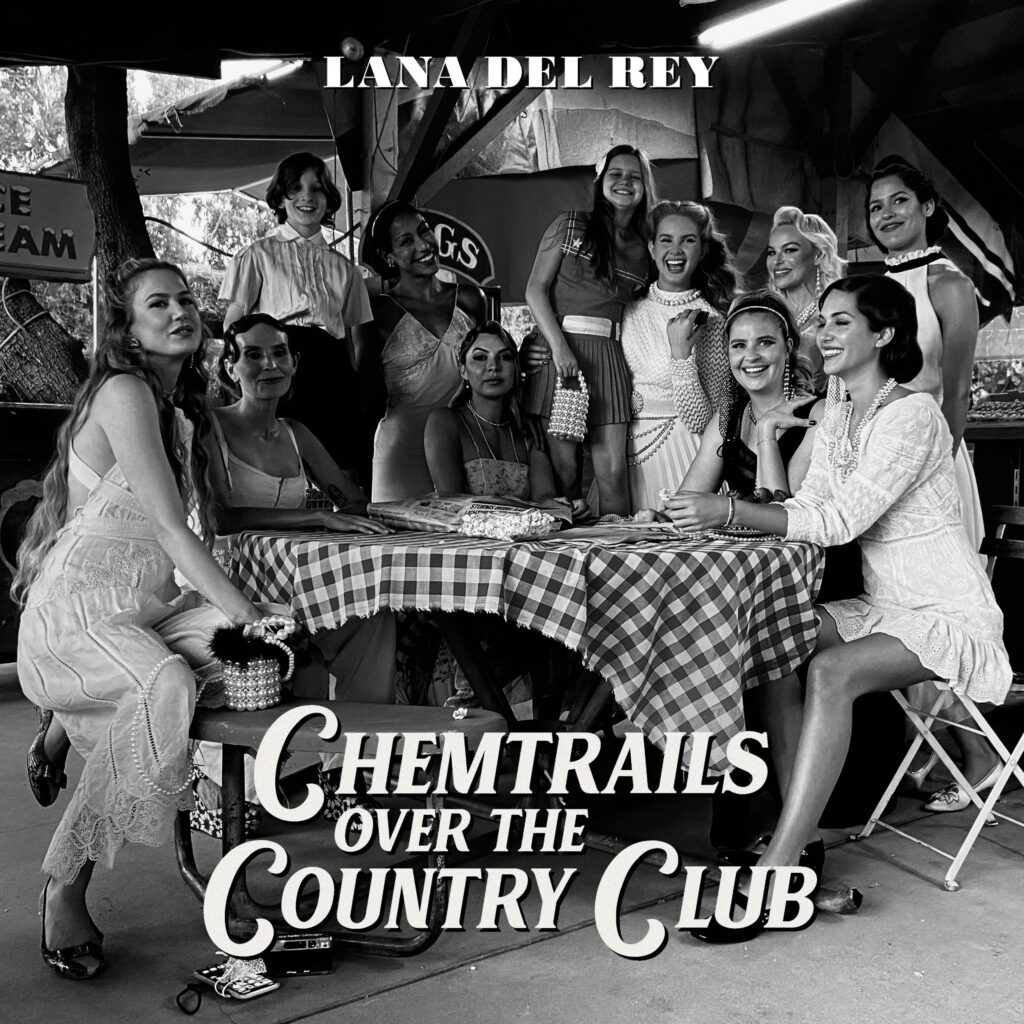 While it perhaps won’t have the same impact as previous releases, ‘Chemtrails Over The Country Club’ is an artful evolution of Lana Del Rey’s image and persona.

Not much introduction is needed for Lana Del Rey at this point, but recounting her story (or, more accurately, the way she’s been portrayed in the media) is a useful exercise in understanding her music and stance today. She’s carved out her own space in the pop mainstream as the self-proclaimed ‘underdog’, using melancholy, breathy vocals and old Hollywood imagery to create music both for ‘the girls and the gays’ and those who simply appreciate good melodic writing. Her music has been both harshly criticised and worshipped, depending on who you ask, and thanks to the golden age of Tumblr at the start of Lana’s career, she became a sort of icon since day one.

Recently under fire for some questionable social media statements that were no surprise, Del Rey’s status as some flawless yet misunderstood, palatable-to-all artist has been rightfully shattered, most likely to her own joy. But social or political statements aren’t her strong suit anyway, as we’ve all seen. After all, what she does best is construct a killer melody and atmosphere, transporting her listeners to an America that never really was and never really will be, that feels familiar yet unattainable. Her previous release Norman F*****g Rockwell! was probably the closest to accurately capturing the social atmosphere of the modern-day United States of America, and was lauded as a new high of Lana’s career and songwriting.

And here we have Chemtrails Over The Country Club. Written straight after NFR! with the same collaborator and partner-in-crime Jack Antonoff, it’s a less focused sibling of the previous release, but just as dreamy. On Chemtrails…, Lana’s as nostalgic for the past as ever, but this time it’s her own. An ache for the romanticised Midwest rather than the West Coast, for simpler times with more certainty and more intimacy, less public image, less change, Chemtrails… is a mostly acoustic affair except for the rare bass beat on ‘Dark But Just A Game’. There are some beautiful melodic moments that rival the best ones on NFR!. Sure, comparison isn’t always fair, but as these records were written so close together, their instrumental quality is an interesting one to reflect on. ‘Let Me Love You Like A Woman’, ‘Wild At Heart’ and ‘Not All Who Wander Are Lost’ strike as the least interesting tracks in this respect, sounding like something we’ve heard from Lana over and over again. Maybe it’s not their instrumentals, but the ‘addressing the lover’ format and ruminating harmonic progressions that render them as ‘less interesting’ – other tracks like ‘White Dress’ or ‘Tulsa Jesus Freak’ just compare better and stand out more with their shifting and growing melodic qualities.

It seems as if Lana Del Rey is trying to de-Hollywoodize her artistic imprint. Just like the cover photo, the presence on Chemtrails… is less solely Lana, more the community she’s yearning for. The titular track and the two final songs ‘Dance Till We Die’ and Joni Mitchell cover ‘For Free’ feature more voices than just her own, not to mention the continuous involvement from Jack Antonoff. And these voices aren’t posed as echoes of the romantic partner as they did with The Weeknd back on Lust For Life, they’re voices of the songwriters that Lana considers peers. She seems done with the posturing of Hollywood starlets as well, an image that she played with back in the day. On ‘White Dress’ and ‘Dark But Just A Game’, she explores this pre-fame and post-fame dichotomy, recalling the God-like simplicity of her waitressing days and the possible descent to madness if continuing playing the game as someone larger than life. It’s unlikely that Chemtrails… will have as big a cultural impact as NFR! did, but in terms of the narrative and artistic evolution of the construct that is Lana Del Rey, it’s yet another interesting iteration of introspection that’s done artfully and without sounding like a therapy session.

Chemtrails Over The Country Club won’t be for everyone. It’s a record that can both fly over somebody’s head as some more of the same, melancholic whispery songs about Jesus-loving freaky men, and something that the average Lana fan can find much value in when listening attentively. It’s quite clear that she’s morphing artistically, and that her partnership with Jack Antonoff is emboldening this transformation as her melodies seem stronger and more unique with each release, yet potentially less palatable for the TikTok generation. They’re just not as easy as before, and another ‘Video Games’ is unlikely, and probably unnecessary, as Lana Del Rey’s approach to music is becoming more and more entrenched in her own artistic lore. (7/10) (Aiste Samuchovaite)

Listen to Chemtrails Over The Country Club by Lana Del Rey here via Spotify, and tell us what you think below!