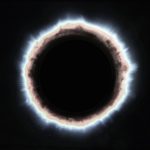 We all know that feeling of walking through the front door during the early hours of the morning after a particularly strenuous night out. Varying emotions cloud the familiar lethargic reflections of the previous hours spent laughing with friends and embarrassing yourself on the dance floor of the chosen club of the evening. Most of us combat the comedown by finding solace in the left over takeaway that was half devoured in the backseat of the taxi ride home. East London trio HÆLOS, however, use a far more constructive strategy.

After a myriad of late night jamming sessions, HÆLOS have managed to channel that 5am feeling into the production of their debut album, Full Circle. “I guess at the heart of it we are always trying to capture that feeling at 5am. That’s the time that all our favourite music gets put on; it’s where the beauty is at” revealed vocalist Arthur Delaney. Having been self-characterised as ‘dark euphoria’, Full Circle couples the melancholy ambiance of ‘90s trip-hop and an echoing harmonic vocal equating to a more contemporary sound familiar to The xx.

Perhaps the most impressive aspect of Full Circle is HÆLOS’ ability to resurrect a style of music pioneered by trip-hop heavyweights Massive Attack two decades earlier but also establish the relevance of that sound in 2016. The album begins with the thought provoking words of philosopher, Alan Watts during ‘Intro/Spectrum’ and then flows effortlessly into second track, ‘Pray’. Perhaps the most empowering song of the album, ‘Pray’ fuses a swelling synth over an intricate drum beat and fittingly introduces the idea of ‘dark euphoria’ that HÆLOS have dubbed their sound. Third track and current single, ‘Dust’ follows a similar vibe but is much darker in composition. Lotti Benardout and Delaney’s ghostly harmonic vocals, “I can’t feel enough / Don’t be the weight of us”, compliment one another beautifully and is enough to send shivers down any listener’s spine.

Following the resonating power of the opening three tracks, Full Circle subtly transforms into a more subdued experience. ‘Oracle’ takes the tempo straight through the floor. Possibly the most blissful comedown on an album of blissful comedowns, ‘Oracle’s’ smooth atmospherics sound like the repetition heard on a slightly damaged vinyl record (but in a good way). ‘Alone’ has a similar feel. The reverberating guitar and disjointed drum beat simply washes over you and is enough to dampen the spirits of even the most dedicated optimist. Perhaps the last highlight is ‘Sacred’. Following Full Circle’s trend of spiritually influenced track names, ‘Sacred’s’ deep abyss of sound is diverse in nature. Benardout’s vocal range is once again clearly demonstrated as they flow through an ocean of eerie electronics and a mysterious background dialogue that suitably accompanies the track’s mystique.

It’s certainly not unfair to say that HÆLOS have taken traits from a variety of influences in order to formulate the sound of their debut, however this far from strips them of their originality or quality. HÆLOS have managed to mirror and further enhance the lethargic sounds of ‘90s whilst both losing no artistic integrity and cementing themselves in 2016 as a very exciting prospect for things to come. (7/10)

Listen to Full Circle here, and tell us what you think below!