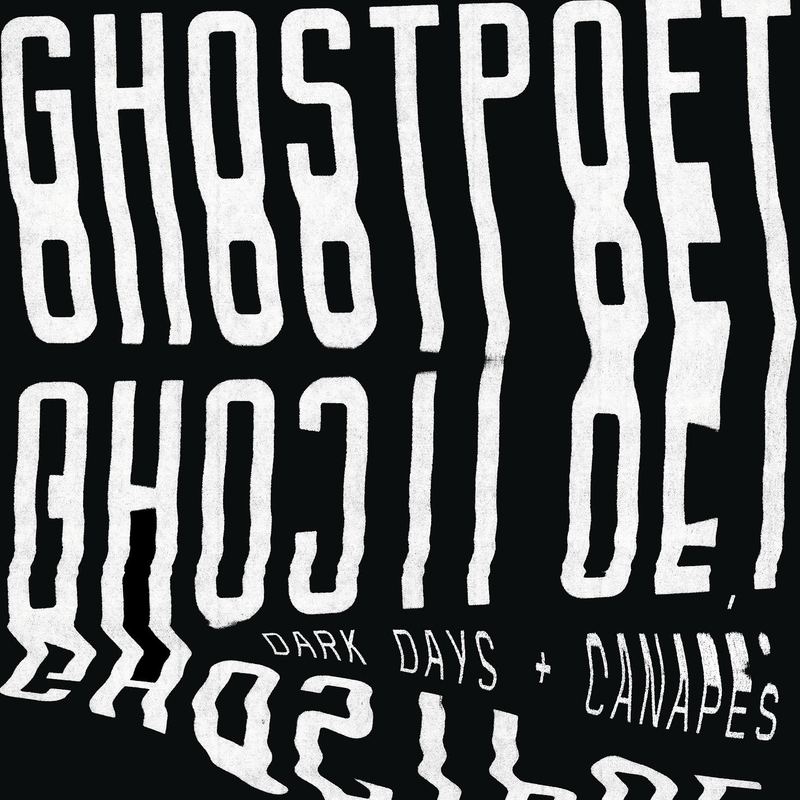 You’ve probably noticed, but in case you haven’t, I’ll just reiterate: the world in 2017 is falling apart. Brexit means Brexit, nuclear warfare means death and, in the case of Dark Days + Canapés, the latest project from London multi-instrumentalist, Ghostpoet – the world is collapsing in on itself in a pit of despair whilst the public looks on, not quite sure how we got here.

Ghostpoet, aka Obaro Ejimiwe, has never been one to shy away from such subjects, but on his fourth LP, in spite of its irony laden title (and tracks), is the bleakest Ejimiwe has ever sounded. The signs have been there, the dark instrumental hip-hop of 2011’s Peanut Butter Blues And Melancholy Jam hinted that here was someone with something to say, but it was only with the release of 2015’s Shedding Skin that the overtly political side of Ghostpoet was shown to be ready to come out.

Tracks laden with references to consumerism and slavery in the modern day were intertwined with an alt-rock meets hip-hop sound which showed an artist truly at home with himself… even if the world he lived in was not somewhere to be comfortable with.

This is only more true on Dark Days + Canapés where we are repeatedly reminded that this dystopian world is a reality. ‘Woe Is Meee’ is a prime example of where Ejimiwe is in 2017; flickering guitar-licks are interlaced with questions of a world bound by technology, but distanced by ideology.

Elsewhere are questions of shop-bought joy during the accessible ‘Freakshow’. Here, Ejimiwe finds himself at home in his alt-rock surroundings, piercing guitars provide a memorable and urgent hook, whilst lyrically his stabs of criticism of a consumerist society are a welcome addition.

What has always made Ghostpoet stand out from the rest is his ability to intertwine darkness with light and that is never more apparent than during ‘Dopamine If I Do’. Strings rise and fall to give a surreal calmness, whilst the bluesy vocal provides a startling contrast between the beauty and terrors of the world. Meanwhile, the guest vocals of EERA bring a pureness to the track, in a startlingly lovely way.

This idea of pop-sensibility crossed with bleakness is one which is a constant on Dark Days + Canapés as Ejimiwe does his best The Bends-meets-Kid A impression to find a balance between the accessible and the artistic statement that needs making.

‘Karoshi’ is a prime example of when the record pushes itself towards something more abstract. The snares spiral away as a fight internally looks to burst out over the lone spoken vocal of “blood shed” and the “waiting for war”. For an album that was finished in the spring, it’s scary how close Ejimiwe may have been with his predictions.

At times the album allows itself to wallow in its sorrow; ‘Trouble + Me’ features off-kilter guitars as the song descends into a hollow madness, whilst ‘Blind As A Bat’ features excellent melodic progression to take the listener from a place of ineptitude to a place of abstract surrealism as the keys move away from all that has come before.

The narrative continues through to album highlight ‘Immigrant Boogie’. Dark and frantic from the off, the track never fails to excite and drive home the ideas of desperation from refugees the world over. Violent imagery of boats sinking and people dying are perhaps the best exemplifications of Dark Days + Canapés throughout.

Dark Days + Canapés is very much a record of its vaguely apocalyptic times, reflecting perfectly the thoughts of many in a way only Ghostpoet can. The record captures the pain and suffering from many, whilst also portraying the pitfalls of a society which thinks a tweet in anger is enough to stop a nuclear bomb. From the hinted political prowess of Shedding Skin this is something overtly different, it’s the culmination of a decade of work and Ejimiwe has never sounded so comfortable, a scary thought given the album’s tone. (8/10) (John Tindale)

Listen to Dark Days + Canapés here via Spotify, and tell us what you think below!