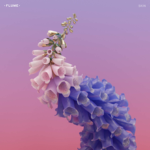 EDM’s struggle to find an appropriate balance between innovative songwriting and the pursuit of commercial viability has plagued the genre’s potential artistic growth since the early days of its existence. Harley Streten, or as he’s better known to his ever extending fan base, Flume, carries little association with this view. The 24 year old Australian beat master’s latest record, Skin may be slightly less digestible than his self-titled debut, however his ability to engage intelligently with an audience remains very much intact.

Expanding on the unique sound of his self-titled 2012 debut but excluding any notion of repetition, Skin retains Streten’s trademark jolting percussion and staccato synth. At an hour long and featuring a body of sixteen tracks, Skin offers a varied selection of collaborators ranging from Raekwon to Beck.

Although at times Streten’s efforts to generate a hit in collaborative singles, ‘Never Be Like You’ and ‘Say It’ distort the album’s artistic integrity, Skin is at its best when Streten demonstrates his more experimental abilities. The exquisite production value heard on tracks, ‘Wall Fuck’ and ‘3’, which incidentally features vocals from the man himself, accentuates Streten’s pioneering capabilities but without appearing too avant-garde for a mainstream audience to appreciate. As a sophomore album, it’s as audacious as it is accessible and suitably reinforces Streten’s relevance in one of music’s fastest flourishing genres. (7/10)

Listen to Skin here via Spotify, and tell us what you think below!

While innocuous on first impression, 'Hotspot' is as intelligent and…

While innocuous on first impression, 'Hotspot' is as intelligent and reflective an album as…