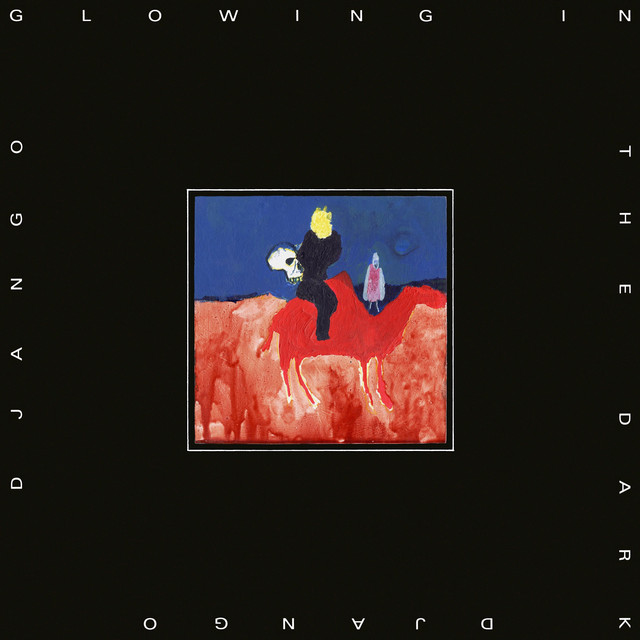 On fourth album ‘Glowing In The Dark’, Django Django partly rediscover the danceable art-rock roots that established them a decade ago.

For those of you who vibed and enjoyed the most recent MGMT material, this new album from indie rock outfit Django Django will be right up their street. In fact, lead single ‘Spirals’, which the band themselves branded a “rousing return to form”, even managed to bag a remix from MGMT. The repeating synths, building up, bubbling at the edge, make for an exciting and intriguing start to the Djangos’ newest record.

Glowing In The Dark follows their 2018 album Marble Skies, an oddity that attempted to build in pop influences alongside their usual danceable, indie-pop template. In 2021, the band seems to be heading back towards their roots; third track ‘Got Me Worried’ borrows heavily from Django Django’s biggest hit, ‘Default’, with a syncopated drum beat and western sounding guitars; and even ‘Waking Up’, their collaboration with English-French actress Charlotte Gainsbourg, borrows from their Scottish contemporaries Belle & Sebastian in the softness of their voices, the acoustic guitars and the welcoming of some soft synths.

It would be unfair to say that Django Django are moving in the complete opposite way of the pop from their previous album; the track ‘Free From Gravity’ features a funky bassline and sparse, subtle instrumentation, and a repetitive chorus, softly singing “we’re free from gravity” as violins float by softly in the background.

Glowing In The Dark fills in background sound but seems to be doing little with it. Most of the chorus, albeit catchy, revolve around simple repetitions of the track name. The reliance on soft ambient synths sometimes sends the tracks into dream-like places, which adds to the album’s soundscapes, but does sometimes risk losing the audience’s attention. It makes for an easy listening record, but nowhere near the art rock heights of previous albums.

‘The Ark’ makes for the most experimental track on the album, with soft and sometimes harsh sounds dancing and fading into the background as a simple, yet impressively intense drum beat rocks on like a train. It makes, oddly enough, for one of the most interesting tracks on the album. Similarly, the next track ‘Night Of The Buffalo’ is one of the most intense tracks on the record. It has a thrilling, driving bass, and lead singer Vincent Neff’s voice edited to match the track’s twists and turns. It’s a thrilling track, mustering enough energy that the track’s final string section comes as a relief.

The best track on the album comes right towards the end. ‘Glowing In The Dark’ features some really exciting vocal mixing and a foreboding synth overlay. It’s inescapably catchy and brilliantly made, with musical references such as Hot Chip (who remixed the track) and early LCD Soundsystem. It’s classic Django Django, but it’s just a shame that such an inspired track had to come so close to the end.

No moment on Glowing In The Dark is ever less than pretty decent: at times it’s actually genuinely enjoyable, but at other times, it just feels like more of the same, promising no more and no less than an existing fan of the band would expect. It’s a Django Django album. Good for it. Onto the next. (6/10) (Harrison Kirby)

Listen to Glowing In The Dark by Django Django here via Spotify, and tell us what you think below!