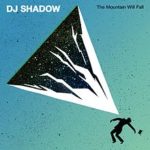 It has been 20 years since DJ Shadow’s classic debut album Entroducing… – one of the most ambitious records of all time, and the first album to be constructed entirely from samples – but since then Shadow, a.k.a. the crate-digging ingenue Josh Davis, has largely been hit and miss, ranging from the mainly great The Private Press in 2002 to the severely lacklustre The Less You Know, The Better five years ago. Yes, his music has always shown ambition but too often the work is pulled down by tracks which don’t seem to belong, his sense of character sometimes drowned out by his willingness to keep up with, rather than lead, the zeitgeist. Unfortunately, on his fifth full-length The Mountain Will Fall, Shadow has fallen down one of his regular pitfalls in lacking the consistency and distinctive vision of Endtroducing….

There are plenty of reasons to get excited here, though; firstly there’s the collaboration between Shadow and Run The Jewels on ‘Nobody Speak’, as a catchy guitar hook and brass instrumentals provide a new backdrop for Killer Mike and El-P to provide their usual greatness. ‘Ghost Town’, too, shows that although Shadow has a great ear for samples of days gone by, he’s more than aware of what’s popular today as the trap beat and ominous piano melody balance excellently.

However, the successful blending of styles on ‘Ghost Town’ is something which is not replicated during ‘Depth Charge’ as Gesaffelstein-like bass is contrasted by fluctuating guitars and classical strings. The track tries too hard and falls flat during the mid-point of the album. This flatness is not helped by the following song ‘Mambo’, which is by far the worst thing Shadow has put to record; the annoying mambo instructional guide and the low, glitched electronics are infuriating at best. DJ Shadow has always been at his best when experimenting, and this is never more apparent than during ‘Bergschrund’, a collaboration with German producer Nils Frahm. The track flows perfectly for its four minutes with hints of early ‘00s dubstep working with textured synths and snares to create luscious hooks and layers.

Fundamentally, DJ Shadow will always be plagued by the expectations that come from releasing a genre-bending album; Endtroducing… will always be remembered as a groundbreaking masterpiece of instrumental hip-hop and, while Shadow may not be able to reach those heights of old again, The Mountain Will Fall is another nice if uneven addition to the American’s discography. Davis’ fifth LP at its worse is still ambitious in his continued attempts to move away from a record reliant on samples, and at its best is genre pushing and layered excellently, and for that he should be applauded. (6/10)

Listen to The Mountain Will Fall here via Spotify, and tell us what you think below!