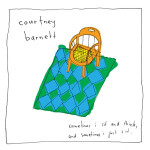 by Matthew Langham and Ed Biggs

Following on from the word-of-mouth success of her 2013 double EP A Sea Of Split Peas, it’s quite hard to believe that Sometimes… is Courtney Barnett’s debut album. Already, she has gained a significant following on the back of her EP which included tracks, ‘Avante Gardener’ and ‘History Eraser’. The former track documenting an unfortunate day in which she had an allergic reaction whilst gardening. Barnett seemed to have a knack for making seemingly dull situations of everyday life into something wondrous and thought-provoking. The Australian’s acerbic and witty songwriting ability with strong narrative and almost lackadaisical vocals provide her with an obvious comparison to the likes of Sheryl Crow, who adopted a very similar style in her early days. Away from the album and in interviews, Barnett is clearly likeable, intelligent and unique.

Her song writing has taken on a significant sense of maturity, with the music slightly less incidental to Barnett’s thoughts than they were on the double EP. Now, the guitars provide a solid mooring for her observations and subsequent daydreaming thought processes. ‘Elevator Operator’ and the flow of non-sequiturs on ‘Pedestrian At Best’ hint at early Dylan, and represent a slightly darker and heavier edge to her personality, rather than a flowing Americana style, with a penchant for observations on generational apathy – “I’m underworked and oversexed / I must express my disinterest”, turning around criticisms that boomers use for early twenty-somethings and using them as virtues and slogans, on the latter. ‘Nobody Really Cares If You Don’t Go To The Party’ is the heaviest track on the record and is stylistically the most similar to her double EP. This is followed by the poppy ‘Debbie Downer’ which perfectly sits alongside the former track. The amusing tale of a swimmer who passes out trying to impress a person in the next lane on ‘Aqua Profunda!’ is another winning moment.

‘Depreston’, considered one of the strongest tracks on the record, centres on the boredom and tedious nature of house hunting, Barnett’s lyrics veering from coffee shops and how much she’s saving a week to wondering about the Vietnam veteran who used to live in the house she’s looking at. The kiss-off line “if you’ve got a spare half a million / you could could knock it down and start re-building” is inexplicably moving in this context. It’s set to the most gorgeous electric guitar swishes that could have fit on to the last two Real Estate albums. The slack blues of the seven-minute ‘Small Poppies’ uses much less reverb and shows that she’s capable of coming up with many different colours and shades with a quite restricted palate. “I’ll make mistakes until I get it right” she sings, shrugging off the pressure she’s under to deliver a great debut, a refreshingly non-careerist approach in 2015. Tucked into the back end of the album, ‘Boxing Day Blues’ and ‘Kim’s Caravan’ down-tempo duo are again another representation of the darker, folk-pop side to Barnett’s songwriting.

The buzz surrounding her records seems to have unfazed her. The loose, conversational and vaguely psychedelic style works wonders on Sometimes… and gives a clear insight that we’ll be seeing her around more. It also demonstrates the fallacy that rock ‘n’ roll needs constant reinvention to stay relevant – the ingredients she uses are as old as the album format itself, but it’s Barnett’s alchemy that makes the mixture of ’10s indie, ‘90s grunge and ‘60s garage pop work. Her interesting insights on real life, and ability to mix the ordinary and extraordinary, are the foundations of this success, and believe me, very few artists can achieve that quality over an entire record. (9/10)