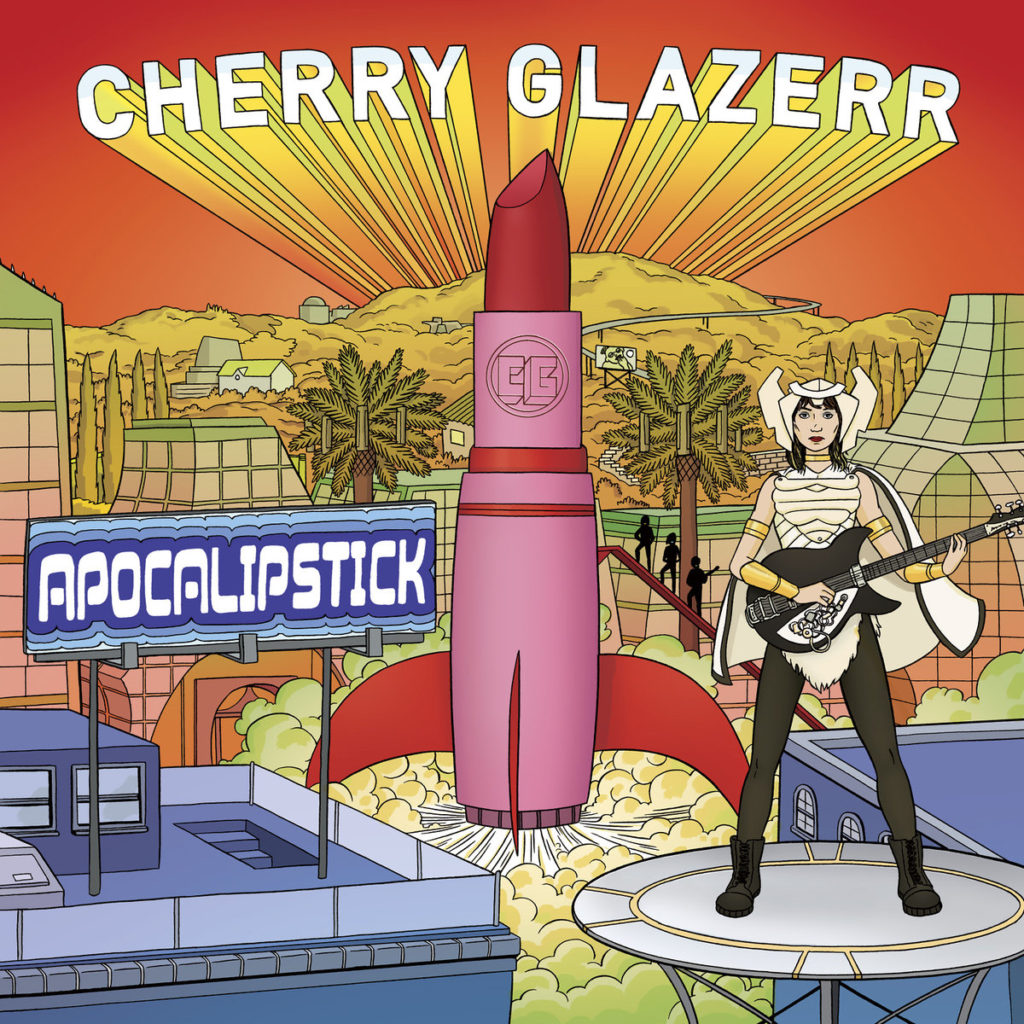 Cherry Glazerr’s Apocalipstick is truly a ‘sophomore’ album, we see the band transitioning from their jangly lo-fi bandcamp sound to a new, refined indie-rock version of themselves. The band emerged as a quirky three-piece, bringing to life the words of lead singer, Clementine Creevy, as an angsty 14-year-old with barebones production. Their sound garnered the attention of Hedi Slimane, leading her to commission ‘Had Ten Dollaz’ for the Saint Laurent runway. ‘Whites Not My Colour This Evening’ was also featured in Amandla Stenburg-directed short film, Blue Girls Burn Fast. Creevy’s bittersweet feminine vocals and playful lyrics perfectly channel vintage riot-grrrl philosophy, providing a modern soundtrack to the revival of this movement.

Clementine Creevy is the only original member of Cherry Glazerr, with the help of new members, and renowned producer Joe Chiccareli (who famously ‘cleaned up’ The Strokes’ Angles in 2011); Apocalipstick shows Creevy growing up in all senses: lyrical content, use of her voice and representation of herself. For example, the single ‘Told You I’d Be With The Guys’ sees Creevy seesaws vocally between sweetly sung lines to wails; she agitates for female solidarity, stating “But I know better now / Than to be with the guys”. The promotional video sees efforts to market a transformed band with changed instrumentation, showing Sasami Ashworth on the keyboard, and Tabor Allen on the drums, all while staying aligned to the band’s quirky image.

‘Nurse Ratched’ also shows progression as a remastered poppy garage song from a previous EP, with added “oohs”, a clean guitar riff and crisp vocals. The track ‘Trash People’ is a jangly keyboard-driven anthem of self-depreciation; the lyrics state the frustration and realities of being in a late teen partial adult phase: “We can’t live a nine-to-five / Art is love and love is sloppy / Nothing is all pure / Nothing is all dirty”. The chorus “my room smells like an ash-tray” makes light of these stresses, diverting from the grilled cheese and menstrual themes of their 2014 debut Haxel Princess.

The lyrics and instrumentation of many of the tracks on the album communicate a sense of containment and self-restriction. Although Creevy shouts in ‘Sip O’ Poison’ and the guitar shreds in ‘Instagratification’, there’s space to be louder. Live performance, and even Creevy’s presence on a Death Grips track tells us Cherry Glazerr can be louder, crazier. The listener is teased with this possibility that grit and gaudiness of the band is being preserved for an intimate live show experience rather than a studio performance.

Overall, Apocalipstick is a refreshing female led indie-rock album, with stream-of-consciousness lyrics on a gritty soundscape. The sonic similarities between the tracks create an enjoyable 34 minutes and allow the album to slot safely within similar sounding works by the Savages and Sunflower Bean. Haxel Princess presents itself as a silly ‘year seven’ version of the band with lyrics relying on minimalism, humour, and a fuzz box, next to Apocalipstick. (7/10) (Benita Barden)

Listen to Apocalipstick here via Spotify, and tell us what you think below!