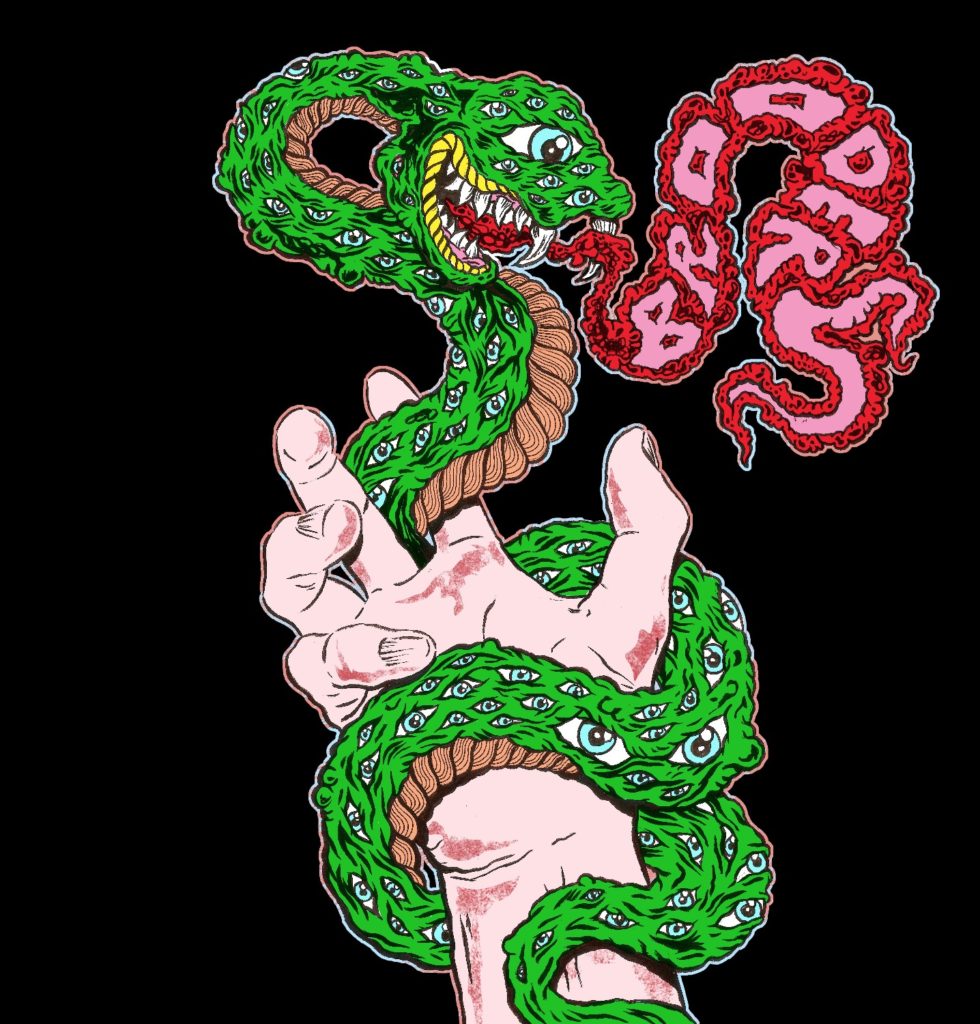 Leeds-based trio Brooders deliver a brief and immensely enjoyable history of their rapid progress so far with a self-titled mini-album.

Brooders have certainly marked their place in the music industry with the release of their self-titled mini EP earlier this month. Known originally as the duo Hunny, the band have evolved from their October 2014 formation, with the recruitment of a bassy Southerner, an appropriate name change (‘Brooders’ being an English variation of the German word for ‘brothers’), and a swapping of two years of stage sharing and constant gigging for the northern city of Leeds where they have worked on perfecting their venomous psych-grunge sound.

Offering a fresh twist on the ‘90s tradition of angry emotive grunge, the trio have successfully modernised it with their monumental melodies, spine tingling hooks and breakdowns that leave listeners kicking and screaming too. This self-titled mini-LP, recorded at Greenmount Studios in Leeds which has hosted the likes of The Cribs and Pulled Apart By Horses, is like a diary entry, documenting their musical ability, events and experiences through six unapologetically ruthless, career defining songs.

Kickstarting the LP is ‘Thrill Killer’, a fast-paced riff-driven track fuelled by its inherent fury. It opens with an eerie screech and comes crashing to an abrupt halt after only two and a half minutes, making it an epic rumble of absolute psych-grunge goodness, through brash vocals, driving bassline and rolling drums which set the tone for the following tracks. Next is the more sedate ‘Cling’, a track coolly nonchalant with its deliciously arrogant lyrics reminding listeners of those moody Nirvana days despite its gradually built eruptions of addictively intense heaviness, offering listeners a dosage of curiosity and satisfaction.

Unquestionably the highlight track, ‘Say Your Prayers’ is ideal for crowd chanting and mosh pit antics. Moving away from the coy, tongue-in-cheek lyrics, the track is almost desolate with front man Adam Bairstow given centre stage to showcase his vocal capacity alongside simplistic instrumentation. But the explosive anthemic chorus grabs listeners’ attention due to its sheer raw power that is both savage yet incredibly gratifying, designating the track a place on Brooders’ set list for sure. Debut single ‘Haze’, released in September 2016, is quintessential Brooders with its sleazy, unrelenting groove laden romp of a track. The biting choppy guitar, thick bass and definite vocals matches the chorus’ powerful peaks giving it the ‘debut’ edge. It fades out in a cacophony of screeching guitars, refusing to give up.

Penultimate track, ‘Blue Eyed Prince’, is Brooders best example of a quiet melody and loud noise as it lulls us into an ill-advised sense of security by smashing pre-conceived notions of the two-minute mark with its anthemic eerie conclusion. This delicate mixture of softness and swagger also characterises closing track ‘Melancholy’, an unapologetic brutal piece with a mournful edge. Exposing every intricate section that they are able to exhibit, Brooders tell of pensive sadness amongst a complete combustion of noise, making it utterly compelling and a fitting end to the selection of statement-making tracks.

Overall, Brooders have proved themselves to be a unique and promising band with a showcase mini-album which successfully documents their musical ability, as well as represents their journey so far. Given that this particular musical template has been done to death, it’s testament to their artistry that this is such a riveting listen. Given the correct artistic nurture and media exposure that this mini-LP justifies, there’s a full-length magnum opus to come from Brooders in the very near future. (9/10)

Listen to Brooders here via Spotify, and tell us what you think below!