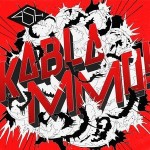 What a tremendous pleasure it is for anybody who was a teenager at the turn of the millennium to see Ash back on the scene! It’s been five years since the conclusion of their intriguing ‘A-Z’ project, a subscription collection consisting of 26 singles released one per fortnight for a whole calendar year from 2009 to 2010. It saw the band attempt to play to their strengths – anybody who remembers their glorious 2002 compilation Intergalactic Sonic 7”s knows they’re one of the greatest singles acts this country has ever produced – but while it produced some absolute gems, the project was ultimately too ambitious and quality control suffered. Declining public interest seemed to indicate that the game was up for Ash, but now, approaching their forties, Tim Wheeler, Mark Hamilton and Rick McMurray wind back the clock to give us Kablammo! Their sixth full album, and first since 2007’s underwhelming Twilight Of The Innocents, it relied upon Pledgemusic to get off the ground, proving that there’s still a lot of love out there for the eternally young-at-heart trio, albeit nostalgic.

But far from being a lacklustre attempt at recapturing their glory years, Kablammo! is a sharp and concise collection that demonstrates that the intervening passage of time hasn’t blunted Wheeler’s knack at writing killer hooks and great pop-punk songs. They launch straight into new single ‘Cocoon’, a scintillating pop-punk that scuds like a missile across the sky, and it’s as if no time has passed at all since 2004. The return to form continues with ‘Let’s Ride’, redolent of the best parts of the ‘A-Z’ series, the pop-tacular ‘Machinery’, the rockabilly feel of ‘Shutdown’ and the daft, trashy fun of ‘Go! Fight! Win!’ with some hilarious cheerleader backing vocals. Some slower moments, like ‘Free’ and closer ‘Bring Back The Summer’, go for melody over volume and work just as effectively. The slightly saccharine ‘Moondust’, complete with strings and indulgent guitar solo, works through charm alone, Wheeler’s sixth form lyrics (“do I question things unseen / as I go through my routine”) notwithstanding.

Kablammo! is not entirely without fault, but it’s a significantly better record than even an optimistic fan could have hoped for. The nothing-y ‘Hedonism’ and ‘Evel Knievel’, which are both pure album fodder, and the unnecessary second piano ballad ‘For Eternity’ (one is quite enough for an Ash album, thank you), are the only bits of flab on an otherwise lean, mean and fit collection. Ash have never really been an albums band – 1977 and Free All Angels remain their finest work on this front – Kablammo! is easily as good as 2004’s Meltdown, thus putting it on an equal footing as the group’s third best album. In any case, having a reputation as a singles band is no bad thing at all: they’re part of an exclusive club that contains The Kinks, XTC, The Cure, The Undertones, New Order, Pet Shop Boys and Supergrass, all great British bands whose most effective means of communication was the humble single. Welcome back guys, it’s been too long! (7/10)