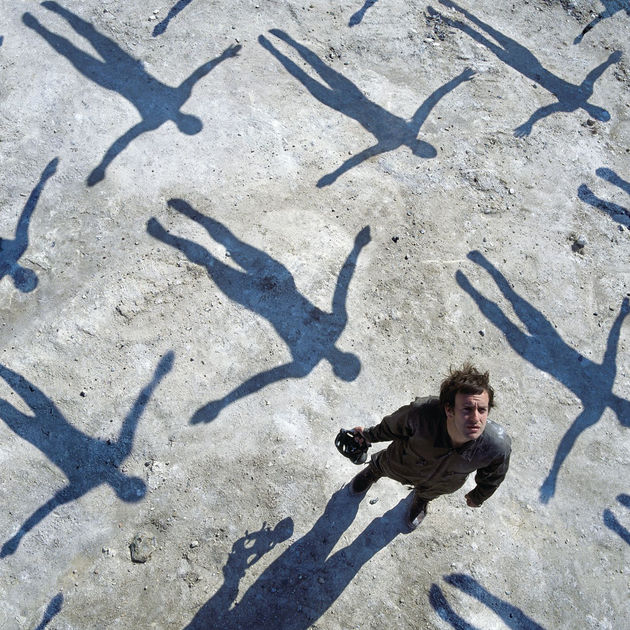 Listening to Muse’s third, landmark album Absolution today, it’s clear how well it’s aged: the themes of paranoia, government corruption, despair and – crucially – hope are just as, if not more, prescient today than in 2003.

Absolution gave us some of Muse’s best-loved tracks, including ‘Hysteria,’ ‘Butterflies & Hurricanes,’ and ‘Time Is Running Out’ and swept the Devonshire three-piece away from the Radiohead comparisons and towards the top of the UK albums chart and an impressive vote from the once-sceptical Kerrang!, who placed the record as the second-best album of the century.

Dusting the CD case off (Absolution was released before the era of MP3 ubiquity) and you’re hit by the striking and unsettling Storm Thorgerson artwork. Few album covers are intended to be thought-provoking and fewer still continue to challenge and spark dialogue a decade after release. Thorgerson’s apocalyptic scene of a solitary human clutching a gas mask, eyes gazed skyward in bewilderment at a somehow floating grid of identical, silhouetted humanoids still puzzles and disturbs even today.

The creeping dread of masses moving in uniform motion is continued on the ‘Intro’ track with its distant marching and barked orders, as if heard by a member of some resistant group hiding out and waiting for the World War III troops to pass.

2001’s classic Origin Of Symmetry may have taken us on an intergalactic ride through a supernova, but Absolution is very much rooted in mankind, its propensity for destruction and lust for power. “This is the end of the world,” roars the ever-optimistic Matt Bellamy on ‘Apocalypse Please’ over a crashing piano march that calls the rebels to arms.

No sooner has the chaos faded than we’re greeted with the slick, yet equally rabble-rousing ‘Time Is Running Out’ that condemns the powers that be and urgently warns that ideas can’t be controlled; a particularly topical issue in our modern climate of censorship, Bradley Manning and Pussy Riot. With its distracting clicks and claps and anthemic chorus, radio-ready ‘Time Is Running Out’ would deceive you into thinking that Muse were embarking upon a more mainstream, ideologically-restrained album in favour of chart climbing over pushing any anti-establishment themes.

That is, until its rubbery bassline gives way to the chaotic screams and metal-infused riffs of the bludgeoning ‘Stockholm Syndrome’. Like a pressure cooker of Bellamy’s falsetto vocals and finger-pointing lyrics, the song’s heated, rising pulse quickens the heart and our stereo practically coughs blood with each snare smash.

Birthed in a post-9/11/Iraq War climate of fear, suspicion and scare-mongering, Absolution is an album undoubtedly tempered by anti-government and conspiratorial insinuations is also truly, madly an homage to love and its pervasive ability to instil hope when all looks hopeless. Next to the fury and visceral brain trauma of ‘Stockholm Syndrome,’ ‘Falling Away’ and ‘Endlessly’ are virtually lullabies, conveying a deep and aching, yet ultimately doomed love.

‘Butterflies & Hurricanes’’ distinctive Morse code guitar and twinkling piano section quickly became a live fan favourite “You’ve got to change the world / and use this chance to be heard,” we are ordered as the gentle flaps of tickled ivories are blown away by the drums and foreboding piano, smashing in unison. At the heart of the album lies ‘Blackout’, an ebb-and-flow symphonic lighthouse that speaks of triumph over adversity and takes stock after the blown-out riffage of the bass-heavy hit of ‘Hysteria’.

Absolution grapples with religion and openly questions where deity lies when Earth’s governments are starving their people whilst simultaneously leading into war. Known to have entertained Richard Dawkins’ reptilian conspiracy, Bellamy has never hidden his atheistic loyalties, embodying the persona of a man scared of what abyss comes after a life without God on ‘The Small Print’. The apocalyptic 3-minuter marks one of the record’s more confessional tracks: “Look through a faithless eye/are you afraid to die?” Bellamy’s voice frantically rushes in the high-tempo, guitar-driven riot.

The album’s final word, the tear-jerking ‘Ruled By Secrecy,’ is riddled with fear and desperation; a broken man lies in ruins whilst seeking a scrap of that wartime manna: hope. Arpeggiated piano chords lap against a weakened cymbal, until those resilient piano chords push through. The song’s a death knell, a moment of respite to bury the bodies. But like after a forest fire, the tiny shoots that grow on the scorched and blackened earth that remains are of hardier stock than their predecessors and mark new life. “Change in the air”; the song’s inescapable sadness is tinged with optimism for a new start.

Muse’s conspiracy hand-wringing would be a theme carried over to their following three studio albums. However, and a real loss in the eyes of many fans, the concerto-like piano strains and off-the-wall madcap rantings would be nipped, tucked and given a shot of electronica, evolving to dubstep, on later work like 2012’s The 2nd Law. The Muse of the 2010s employ a cleaner sound, favouring groove over grandiose but retaining that trademark tendency for the symphonic and are still unafraid of venturing into controversial territory.

Having been accused of being alienated and alienating after Showbiz and Origin Of Symmetry’s space-fixated motives, Muse delivered an album of humanity. Full of pessimism yet sprinkled with hope, it perfectly captured the darker side of 2003’s political climate and sent the Teignmouth trio on a rocket to stardom. As arresting as ever, Absolution’s message continues to get stronger as ever more trigger-happy governments hover their fingers over the buttons of destruction.

Listen to Absolution by Muse here via Spotify, and tell us what you think below!