From Worst To Best: Slayer 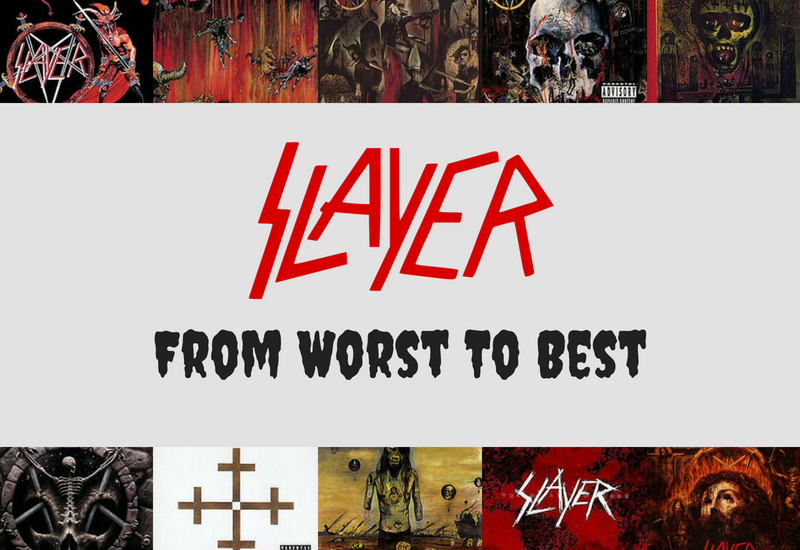 Influenced: Megadeth, Rage Against The Machine, Alice In Chains, Carcass, Pantera, Sepultura, Ministry, Killswitch Engaged, System Of A Down, Slipknot

Over their nearly four-decade career, Slayer have been called many things by the press and Christian religious groups who so urgently wanted to censor them, with labels such as ‘Nazi sympathizers’ and ‘white supremacists’ to name a few. This will all come as very little surprise when one investigates their subject matter and, in addition, also explain why Slayer have always been more of an acquired taste even when compared with their ‘Big Four’ colleagues (Metallica, Megadeth, and Anthrax), let alone any metal band in existence.

Slayer was formed in 1981 in Huntingdon Park, California by guitarists Kerry King and Jeff Hanneman, vocalist/bassist Tom Araya and drummer Dave Lombardo. Right from the off, Slayer were considered Satanic, with their earliest live performances in Californian clubs consisting of pentagrams, inverted crosses, spikes, and other devilish intimations. Their early setlists comprised of covers originating from the group’s main influences including Iron Maiden, Judas Priest, Mercyful Fate and Venom. Moreover, hardcore punk bands like Black Flag and Dead Kennedys are also notable key inspirations. But Slayer’s raison d’être always pinpoints back to the Satanic dogma that became instantly apparent on their self-financed 1983 debut Show No Mercy, where the album cover features fiery text and a hell-bred minotaur holding a sword.

The ‘80s was undoubtedly a prosperous time for Slayer, albeit the media stick they received, with the release of Reign In Blood in 1986 building support for the explosive thrash metal scene which predominantly embodied the disenfranchised male youth of that decade. The domineering, fast, and aggressive punk rock-inspired thrash sound was heavily influenced by the punk and NWOBHM movements in the UK. The high-speed picking, blistering solos, commanding vocals, accentuated double-bass drums, and Luciferian undertones made Slayer a demonic force of nature. This is why virtually every negative stereotype ever held against the metal genre can be traced back to Slayer. Whilst they were not the first metal band to reference Satan in their music, Slayer were the first to commercialise it – bringing about attraction and detraction simultaneously in the process.

It is no surprise that Slayer have ruffled a few feathers over the years with the content of their lyrics, predominantly written by Hanneman and King, where the former took a keen interest in German war medals, given to him by his father, and the history of Nazi Germany. He even once bought a Knight’s Cross medal from a fan for $1,000. References to this harrowing and tyrannical period in history are to be found on several occasions within Slayer’s discography: even alongside Nazism, the band also discuss murder, religion, hate crimes and torture to name a few.

This did not mean, however, that the band members condoned or sympathised with any of the above atrocities, as they endeavoured to explain multiple times in interviews. Araya said back in 2004: “No. People thought we were serious! Back then, you had the Parents Music Resource Center (PMRC) who literally took everything to heart, when in actuality, you’re trying to create an image. You’re trying to scare people on purpose.” This statement from Araya perfectly sums up why the PMRC, Christian groups and the media were wrong. Luckily for Slayer, thousands of people were not buying into their outrage, with the well-known ‘Streisand effect’ undeniably playing a key role in enlarging their fanbase.

Popular modern metal bands like Lamb Of God, Behemoth and Gojira have all cited Slayer as a major influence. For bands who relish in the extreme sub-genres of metal, Slayer’s impact goes without question. They were one of the first metal bands who were brave enough to properly communicate images of blood, gore, and violence to listeners with heart-pumping consequences. But after 37 years of mayhem, Slayer are embarking on their Farewell Tour in the summer of 2018. On the road, they will be joined variously by Testament, Anthrax, Lamb Of God, Behemoth, Obituary and Napalm Death.

To celebrate their legacy, on the next page we begin a countdown of Slayer’s studio albums ranked from worst to best (excluding their 1996 punk rock covers album Undisputed Attitude, which only ever appealed to die-hard fans).

We’ve also got an Introduction To… playlist over at Spotify, serving as an edited highlights reel for new fans.