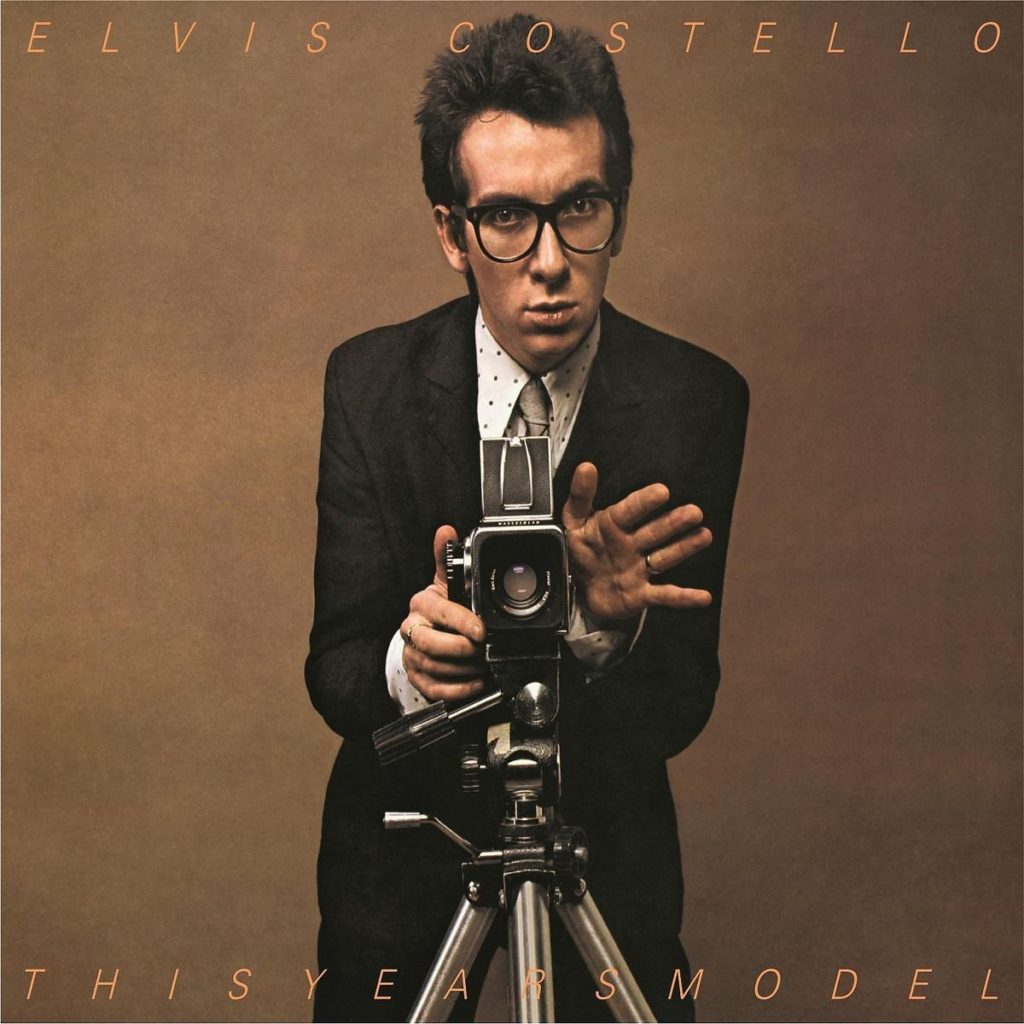 Having set up the template of the bitter, disaffected male singer with his debut album My Aim Is True in 1977, Elvis Costello rapidly perfected that archetype less than a year later with its successor. Notwithstanding his multi-faceted talents and subsequent artistic successes throughout a career that’s lasted four decades and 28 more albums, This Year’s Model has almost universally been regarded as Costello’s finest hour.

By 1978, the fires of punk had more or less completely burned out, and Costello, with his melodic ear and emotional depth, was already well placed as the scene evolved into post-punk and new-wave at the end of the Seventies. But the success of This Year’s Model was not down to him alone – it also coincided with the start of his relationship with backing band The Attractions, who became by far and away his most famous musical partners-in-crime. A consistent collection whose enduring appeal is every bit as down to the band’s executions as it is their leader’s songwriting, This Year’s Model was to be the foundation of a working relationship between Costello and The Attractions that lasted until for nine studio albums until 1986’s Blood & Chocolate, and then an encore for 1996’s All This Useless Beauty.

The eight months between My Aim Is True and its follow-up had seen two significant shifts in Costello’s working practices. Firstly, Costello’s manager, the characterful Jake Riviera, had departed Stiff Records (which he had co-founded) and brought Costello and My Aim Is True’s producer, the pub-rock luminary Nick Lowe, to the newly established Radar Records at the end of ’77. The one change precipitated the second, more crucial one, with the formation of his new three-piece backing band.

The Attractions came together quickly, but already had years of experience, consisting of veterans of other established backing groups. Bassist Bruce Thomas, almost 30 years old at that point, had played in groups going back to 1971; drummer Pete Thomas (unrelated) was the same age as Costello at 24 and had been a member of pub-rock favourite Chilli Willi & The Red Hot Peppers; only 19 year old Steve Nieve, a keyboardist with classical training, had no experience in rock groups.

Combining their talents with Costello’s, the Attractions became one of the most formidable and versatile units in British music, and that talent was fully realised right from the beginning of their musical relationship, as the flawless singularity of This Year’s Model attests. There’s a tangible sense of continuity from their first album, with all of the dozen tracks left over from the sessions for My Aim Is True or written on the road during the tour to support it.

There’s absolutely no showing off going on in This Year’s Model’s 36 lean, focussed minutes; the group’s talents are absolutely locked in step with the pace and dynamics that Costello’s songwriting and performance requires, providing the perfect backdrop and context for his sharp, bitter and humorous psychodramas, but never, at any point, do Nieve and the two Thomases steal the limelight from their leader. Clover, who had backed Costello on My Aim Is True competently, never sounded as absolutely in sync with their leader as the Attractions.

If this description makes the record sound sterile and workmanlike, it couldn’t be further from the truth. Any old shill can use their personal misery as a platform, but nobody does it as originally and brilliantly as Elvis Costello on This Year’s Model. Tingling with nervous, amphetamine energy from start to finish, it has the insight of emotional music and the steely-eyed conviction of political, protest songcraft, making affairs of the heart sound like burning social injustices.

What’s interesting, for an artist so famous for his guitar that the image of him wielding it like a machine-gun on the front cover of his debut has become one of rock’s legendary poses, is how little This Year’s Model features any guitar at all. All the songs are designed with a sturdy chassis of drums and bass guitar, with flourishes and textures of Nieve’s keyboards the bodywork, and Costello’s blocks of guitar chords only making brief appearances and acting more as decoration. Pete Thomas’s drumming, in particular, is consistently excellent, accented perfectly when laying down regular rhythms, such as on the lithe, lean ‘Pump It Up’, and shifting like tectonic plates on less straightforward cuts like ‘This Year’s Girl’, which seems to be constantly about to collapse on itself.

The reggae inflections of ‘(I Don’t Want To Go To) Chelsea’ provided another Top Twenty hit single for Costello, and is probably the most guitar-orientated moment on the album. The taut, circling riff powering ‘Pump It Up’ plays off against a breathless vocal performance. The clipped chirrups of keyboards on ‘The Beat’, despite a seemingly sunny disposition, crackles with tension and retains an edge because of Nick Lowe’s skeletal production and Costello’s sneering delivery. ‘Radio Radio’, a non-album single but included on all subsequent re-issues of This Year’s Model, sounds like Bruce Springsteen would if he was English. The swinging rock of the jealous, possessive ‘You Belong To Me’ is as close to showing-off as the Attractions get.

Lyrically, Costello sets out his stall on the jerky, frenetic opener ‘No Action’, in which he tells the ex-girlfriend “I just want to put you down” like an embittered teen romantic writing the rulebook on revenge-fantasy and fuck-the-world songs in real time. That theme of being emotionally burned, and having those experiences colour your subsequent attempts at romance, continues in the snarling ‘Hand In Hand’ and the seething jealousy of ‘Living In Paradise’.

However, Costello never comes across as needlessly nasty or misogynistic, as he has the ability to turn that stinging fire on himself too, finding his own personal truth at the centre of all the anger and disappointment as he picks at the scabs of failed relationships. The pseudo-balladry of ‘Little Triggers’ features some of Costello’s finest wordplay (“Thinkin’ all about those censored sequences / Worryin’ about the consequences / Waiting until I come to my senses / Better put it all in present tenses”). The sexual menace and self-doubt underpinning ‘Lip Service’ and ‘Lipstick Vogue’ make for great highlights in the album’s final third, capped off with the morose new-wave of the album’s original closer ‘Night Rally’ features provocative references to fascism, a theme that Costello would go on to explore more deeply on 1979’s Armed Forces.

Ceaselessly energetic yet also effortless and elegant, This Year’s Model has always been a critics’ favourite. Any check of Wikipedia and Metacritic informs us that professional critics find it not only to be great, but actually flawless, and it is consistently in the Top 100 of Rolling Stone’s often-updated 500 Greatest Albums of All Time list. The listening public reacted positively too, with sales of more than 100,000 in Britain and half a million in the States making it one of Costello’s most popular records.

Which is an odd legacy for such an unassuming, self-effacing and self-contained collection of songs, which seem so functional and utilitarian at first listen. Nothing really sparkles or dazzles, no histrionics are involved. But as a study in pure songcraft, very few experiences are as fundamentally impressive as what Costello and the Attractions manage on This Year’s Model. It’s very easy to try to copy, as legions of broken-hearted and aggrieved rock frontmen in the subsequent 40 years will attest, but almost nobody has beaten or even emulated it.

To paraphrase Matt LeMay’s 30th anniversary retrospective for Pitchfork, pop music is rarely as purposeful and ferocious, and rock music is rarely as melodic, thoughtful and unassuming as This Year’s Model. It’s the sound of Elvis Costello perfecting his craft at a precociously young age.

Listen to This Year’s Model by Elvis Costello & The Attractions here via Spotify, and tell us what you think below!