From Gangsta Rap to Despicable Me: A Short Guide to The Neptunes and Pharrell Williams 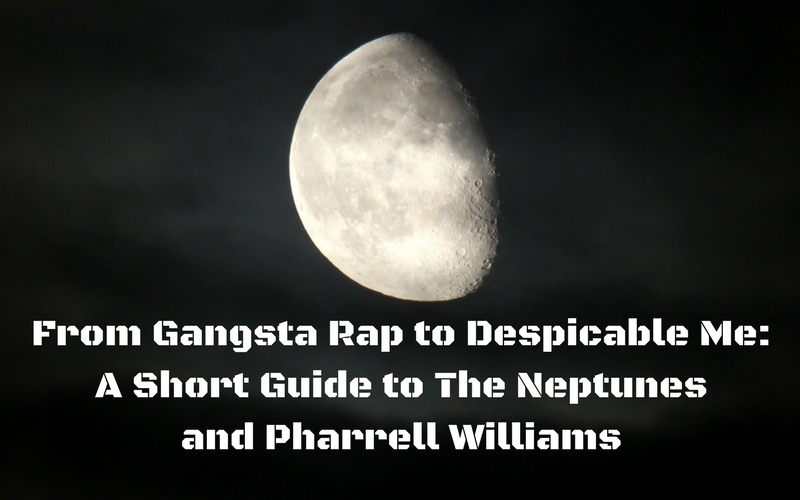 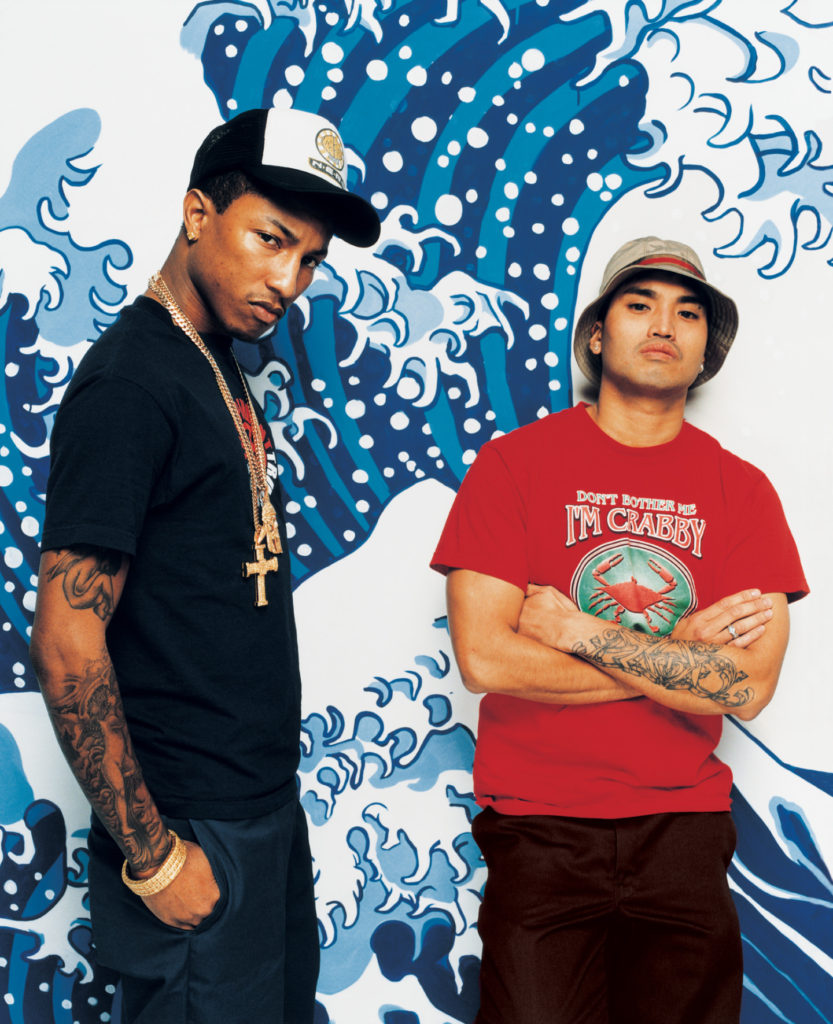 The beginning of the millennium saw the interpolation of hip-hop and rap into mainstream consumption. Rap features, instrumentation and hip-hop influence hung heavy in popular chart music.

Hip-hop producers were in heavy demand, as every artist needed a bass-riddled ‘urban’ instrumental to climb the charts. In the years 2002-2005, the rap scene was at its most competitive, big name record makers such as Swizz Beatz, Timbaland, and Jermaine Dupri emblazoned the production credits of leading tracks, it was in this environment, The Neptunes gained traction, spearheaded by Pharrell, the production duo created a distinct sound that infiltrates the music industry to this day.

‘The Neptunes’ itself is the title of long-time friends Chad Hugo and Pharrell Williams’ record production team. Since their development circa 1990, the duo have re-appeared as a record label (Star Trak records), a funk-rock rap group (N*E*R*D*), or even under Pharrell Williams as a solo artist. The duo’s knack for street fashion brands such as Bape and Thrasher allowed them to create a distinguishable cult following. This following is so distinctive, that it expands to other musicians. Tyler, The Creator has publicly cited Williams as an influence multiple times. Tyler’s appreciation has single-handedly expanded The Neptunes following to a new generation. To many young black creatives, Pharrell is held as an icon, as he represents some sort of brand independence, in an industry where this is sparse.

I WAS 15 ATTENDING SUMMER SCHOOL AT HAWTHORNE HIGH, SPENDING MOST OF MY NIGHTS TRYING TO FIND ANY SNIPPETS OF THE ALBUM ON VARIOUS GERMAN SITES. THEN 7/25/06 CAME. IMM RANGES IN DIFFERENT STYLES AND SOUNDS AND I BELIEVE THATS WHY I GRAVITATED TO IT SO MUCH. THE UPRIGHT BASSLINE ON "CAN I HAVE IT LIKE THAT" OR THE BUCKETS ON "HOW DOES IT FEEL". OFF THE WALL MJ ON "NUMBER 1". I STILL TO THIS DAY DONT THINK I CAN MAKE A SONG BETTER THAN "THAT GIRL". AND "I REALLY LIKE YOU GIRL" IS EASILY THE BEST SONG ON THIS ALBUM WITH YOUR BEST TIMBERLAKE IMPERSONATION AND STEVIE HARMONICA. IMM ALSO INCLUDES "RASPY SHIT" WHICH IS THE WORST SONG IN YOUR DISCOGRAPHY I HATE THAT SONG SO MUCH YOU ARE SO GROSS FOR THAT. BUT THE ONE THAT STOOD OUT WAS "YOU CAN DO IT TOO". THE SADE BASSLINE, THE STRING PAD WITH CHORDS THAT YOU CLAIM ONLY Q-TIP, YOU AND I LIKE, THE JAMIE CULLUM OUTRO! BEING 15 BLACK NOT REALLY "INTERESTED" IN WHAT THE MAJORITY OF MY PEERS WERE INTO, IT MADE ME FEEL SAFE. I WAS OPTIMISTIC, ALWAYS DAYDREAMING AND SETTING GOALS SO I FELT YOU WERE DIRECTLY SPEAKING TO ME. I REMEMBER CLANCY TELLING ME HOW JIMMY IOVINE THOUGHT THIS ALBUM WAS A "COMPLETE FUCKING FAILURE IT DIDNT WORK". BUT SEE, IT DID, JUST NOT ON THE KIDS HE WAS LOOKING AT. THE ONES WHO JUST EXISTED;USED THE POPULAR SLANG;LISTENED TO WHAT WAS THROWN AT THEM;DRESSED IN CLOTHING THAT WAS TRENDING AT THE TIME. NOT SAYING THATS BAD BUT OF COURSE THIS WOULDNT WORK ON THEM. BUT IT WORKED ON ME AND I CREATED ODD FUTURE THAT SAME SUMMER. I WAS ACTUALLY NAIVE ENOUGH TO BELIEVE YOU AND THOUGHT I COULD DO ALL THESE AMAZING THINGS IF I REALLY TRIED. WHERE I GREW UP, NIGGAS GET STUCK AND NEVER MAKE IT OUT. JAIL, DEAD, SHIT JOBS, NOT REALLY GROWING. IT SEEMS LIKE AT A CERTAIN AGE, IDEAS; ORIGINAL THOUGHTS ARE NO LONGER A THING; I DIDNT FALL INTO THAT CYCLE. I'M NOW A YOUNG ENTREPRENEUR ALL BECAUSE I BELIEVED YOU WHEN YOU SAID I COULD BE. YOU WERE THE FIRST PERSON I CONTACTED WHEN I PULLED OFF THAT MCLAREN DEALERSHIP! THIS IS GETTING LONG SO UHHH, HBD IMM. I NEVER HAD BROTHERS,UNCLES OR MY FATHER AROUND SO THANK YOU FOR BEING THE MALE FIGURE I GRAVITATED TO. ALLOWING ME TO EMBRACE BEING DIFFERENT AND TRUSTING MY IDEAS ❤️

The grassroots of The Neptunes began when group enlisted themselves as an R&B group for a local talent contest. Their performance garnered the attention of R&B big-shot Teddy Riley, whose studio was adjacent to their high school. Riley himself had been responsible for pioneering a ‘New Jack Swing’ sound in ‘80s and ‘90s R&B, most notably in the records ‘I Want Her’ by Keith Sweat or ‘My Prerogative’ by Bobby Brown. Riley’s most acclaimed work however was Michael Jackson’s 1991 album Dangerous.

Previous attempts by Williams and Hugo had been made to infiltrate the music industry alongside local producers, Magoo and Timbland; the four formed a group called Surrounded By Idiots, which disbanded before any records were created. With the unfettered support of Riley, Williams and Hugo were able to shape their distinctive sound on the records they were commissioned. By the late ‘90s, The Neptunes had production credits on a remix of SWV’s ‘Right Here’ and Blackstreet’s debut album with the track ‘Tonight’s The Night’. Timbaland and Magoo also emerged as a successful rap production duo shortly after.

The earliest fledgling of what is known as the ‘The Neptunes sound’ can be heard on a remix of New York hip-hop group Brand Nubian’s 1998 song ‘Don’t Let It Go To Your Head’. Originally, the song is a smooth, clean-cut R&B-influenced song, sampling the vocals of Jean Carne. The Neptunes remix, flips the song into a grittier, louder version of itself.

The Neptunes then solidified their sound in 1998 on Norega’s ‘Superthug’. This gave The Neptunes their first breakthrough to commercial success. The song was the second single from Norega’s debut solo album, N.O.R.E. It became Noreaga’s highest charting and most successful single, peaking at #36 on the Billboard Hot 100 and reaching #1 on the Hot Rap Tracks chart. The Neptunes continued to rapidly evolve from this point onwards, acting as a literal catalyst for rappers wishing to access the mainstream market. By 2001, the group became one of the most in-demand record producers, their clientele expanded to include Babyface, Ol’ Dirty Bastard, LL Cool J, Ludacris and Busta Rhymes.

The mainstream radio was stamped with The Neptunes signature sound. In fact, by August 2003, when Pharrell had turned 30, he was responsible for producing 43% of the songs on the radio. Chad Hugo himself explains what makes a Neptunes beat distinguishable during a short scene in the self-produced documentary, The Neptunes: Eighth Planet. Hugo says “If a snare is banging POP! It’s going to hit you… You feel that snare snap and it’s going to make your neck snap, you hear that kick it’s going to hit you in the back… so when you hear that kick and snare it gets you in the groove.” Flat, snappy percussion and drum loops is what best characterises a Neptunes beat. Additional but not essential ingredients to the Neptunes formula include video game-esque synths and Pharrell’s vocals.

From 2001 to 2005, the duo continued to titillate between the drum heavy minimalism we hear on tracks like Clipse’s ‘Grindin’ and the synth heavy, funk influenced instrumentation on Usher’s ‘U Don’t Have To Call’ or Ludacris’ ‘Southern Hospitality’. Williams also began to experiment vocally; early signs of his imperfect falsetto appear on Jay-Z’s ‘I Just Wanna Love U (Give It 2 Me)’, where he interpolates Rick James’ ‘Give It To Me Baby’ into the song’s chorus. It’s here, in Pharrell’s slight experimentation, the fledglings of Pharrell Williams – the vocalist and rapper – appear.

For upcoming pop stars, The Neptunes were the go-to producers for ‘urbanising’ the sound of a given musician. Hip-hop and R&B was in demand, and they were the gateway to a ‘safe’ infusion of those influences into vapid pop songs. Justin Timberlake’s debut solo album, 2002’s Justified, is a clear cut example of this process. Following the hiatus of ‘NSYNC, Timberlake sought absolve himself of his pop star image, and all it took was a haircut and a Neptunes beat. The new Timberlake was brought forward on the single ‘Like I Love You’. Hugo and Williams set him up on a minimalistic, catchy instrumental, composed of a simple guitar loop and the signature punchy Neptunes drum kit.

Timberlake’s urbanisation process is then set in stone with a verse from Clipse, a gritty rap duo from Virginia. The single landed Timberlake a nomination at the 2003 Grammy Awards. Britney Spears was also handed her bad-girl image by The Neptunes on the Janet Jackson hand-me-down, ‘I’m A Slave 4 U’.

All the while, Williams and Hugo were steering towards creating their own output as musicians, forming the band N*E*R*D through Virgin Records in 2001. Their debut album, In Search Of…, was certified Gold by the Recording Industry Association of America. The formation of N*E*R*D saw Hugo and Williams transform rapidly from the content they had been producing as The Neptunes, although the influences still lay within the tracks, the band’s knack for experimentation and rock influence alienated many of their earlier fans, the band garnered a niche, smaller following.

N*E*R*D also struggled to develop lyrically, either taking on themes designed to appease alienated teenagers like in the track ‘Fly Or Die’ or delving into obscurity, which we hear on 2008’s Seeing Sounds, a concept album revolved around synaesthesia. After 2011, the band began to falter into obscurity, with their child-like appeal leading to their commission for the soundtrack of The SpongeBob Movie: Sponge Out Of Water.

From this time onwards, Pharrell Williams decided to pursue a more wholesome and clean-cut image. The man responsible for the commercial breakthrough of Clipse, a rap duo whose subject matter was almost entirely drug dealing, and the producer of the entirety of Mystikal’s sexually explicit records, began wearing dodgy hats and talking feminism, as well as going on to write for Despicable Me. In 2013, he wrote or featured in the three biggest hits around the world that year – the aforementioned movie’s ‘Happy’ soundtrack, Daft Punk’s ‘Get Lucky’ and Robin Thicke’s ‘Blurred Lines’.

While the project has been mothballed for a while, The Neptunes’ story isn’t over yet, with Williams and Hugo still entrenched in the music industry. The possibility of their re-emergence has been ominously hanging in the air ever since their hiatus – but with recent clues emerging as to a possible reunion for their N*E*R*D* project for a first album in seven years, perhaps their time will come again.

Check out our Introduction to The Neptunes playlist via Spotify below, and tell us what you think below!