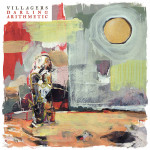 Literate Irish folksters Villagers return with their third album, their first since 2013’s Mercury nominated {Awayland}. Primarily crafted near Dublin, this is Conor O’Brien’s most intimate and revealing record to date, and probably his most accessible. Although it deals with heartache, its all-encompassing sense of melancholia is strangely uplifting and cathartic, achieved through O’Brien’s ability to pull off some tremendous literary references. This is much more of a return to his troubadour-esque soundscapes informed slightly by electronica.

Album opener ‘Courage’ sets the scene for the record and is an uncomplicated acoustic lullaby set to electronic samples of Brian Eno would be proud. The theme of the track is direct and honest relating to his openness about his sexuality. ‘Hot Scary Summer’ and ‘Dawning On Me’ follow in similar suit with subtle late-night tones perfect for that point at which you are about to fall asleep.

‘No One To Blame’ and ‘So Naïve’ perfectly close the nine-track album, which is mostly philosophical and perhaps a form of healing for O’Brien. It is tremendously crafted record that, because of its morbidity, has to be listened to in a certain state of mind. It isn’t a happy record, but has a distinct subtlety which makes it stand out from previous Villagers releases. (7/10)