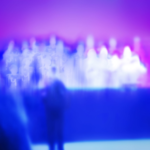 Canadian experimental artist Tim Hecker has, by degrees over the course of 15 years, got to a point where his albums are being anticipated by a wider circle of listeners than simply ‘those who bought the last one’. After all, a man with a PhD in ‘urban noise’ (!) and who used to be a university lecturer in ‘sound culture’ is almost bound to be pigeonholed as an acquired taste, but those who’ve been willing to dip their toes in have almost always enjoyed the lush, stimulating electronic soundscapes he produces. 2011’s Ravedeath, 1972 proved to be the turning point for Hecker, followed by 2013’s excellent Virgins. His first album for 4AD, Love Streams, seems like a suitable home for his music despite the label’s reputation for guitar-led dream pop, and is yet another artistic triumph.

A hallucinogenic, drone-like ambience pervades the entire album, thanks possibly to Hecker’s professed interest in 15th century liturgical music and how it might fit into the modern pop aesthetic, describing the recording of the album as a search for the “transcendental voice in the age of Auto-Tune”. Underneath the high concept, though, the atmosphere is very inviting, and arguably the most human thing Hecker has ever created. Textures, tone clusters and timbres have always been his stock-in-trade, rather than melodies or even lyrics, but we actually get to hear some voices for the first time in Love Streams.

The smeared, digitally warped field recordings are all in place, taken from a number of unusual locations such as the organ from an abandoned church in Iceland, but this time there’s a tangible sense of struggle between the digital and physical worlds, a dichotomy that’s set up right from the opening track ‘Obsidian Counterpoint’. Pastoral flutes move tectonically with pinging bells and effects as a synthetic soup quietly bubbles underneath, and this is a gentle tension that exists more or less throughout. ‘Castrati Stacks’, the taster for Love Streams, encapsulates it perfectly by creating an environment of paranoia as a lone voice cuts through a mists of rough and smooth noises. The astounding closing track ‘Black Phase’ contains the clearest human voices yet, a minimalist choir battling against growling feedback.

In other places, Love Streams sticks closer to Hecker’s established blueprint but is no less striking because of it. The Radiohead-esque smears of ‘Up Red Bull Creek’ are familiar territory, and ‘Bijie Dream’ sees him run through his repertoire of digital processing and sound collaging. The entire album is one continuous piece of music, with the open-ended song structures providing a strikingly pretty and very rewarding journey for those prepared to fully immerse themselves in this ambient, impressionistic atmosphere.

These songs are abstract paintings, with the suggestion of images fuzzed-out around the edges leaving your own imagination to fill in the gaps. While Love Streams can sometimes feel very slightly impersonal and overwhelming, like walking around a 360° art installation, spiritually and sonically Hecker belongs alongside Fuck Buttons and post-rock masters like Godspeed You! Black Emperor and Mogwai: those who can create entire universes without words. (8/10)

Listen to Love Streams here, and tell us what you think below!