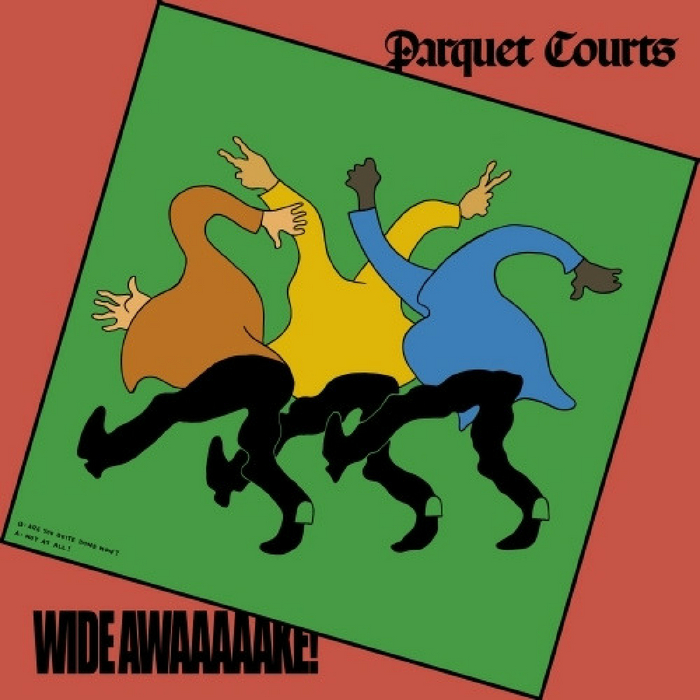 Parquet Courts’ fifth album ‘Wide Awake!’ is the boldest record they’ve made so far, both musically bold and unambiguously political.

In seemingly no time at all, Brooklyn’s brutalist Parquet Courts are onto their fifth album. 2016’s Human Performance was a development in the band’s sound, toning down the rage and honing and refocusing their lyrical themes. However, Whilst Parquet Courts have always had a political streak to them, it has never been as clear-eyed or as punchy as on latest effort Wide Awake!

Opener ‘Total Football’ is immediately a message of solidarity – “Workers, authors, poets, stoppers, power resembled, if we are assembled”. Its raging guitar riff is straight London punk, and the song’s title becomes clear in the football-chant outro section – to stick with the British theme. Fantastic single ‘Wide Awake’ takes shots at those who purport to be “woke”, whilst saying very little about anything – anyone with a Facebook account will know the sort of person the song is aimed at.

Whilst Wide Awake! is quite thoroughly a political album, the song ‘Violence’ still manages to come across as a slap in the face. Over a jumpy, Doors-y organ, Andrew Savage rants out some of the most paranoid, perceptive, and powerful lyrics he has written so far. As a state-of-the-nation polemic, Parquet Courts have been pipped to the post by a few weeks by Childish Gambino, and whilst ‘Violence’ is less subtle, it packs a similar punch in dealing with similar themes. In lamenting the lack of “folk songs about ATM machines”, Parquet Courts seem to be taking aim at the frivolity of entertainment. “Allow me to ponder the role I play in this pornographic spectacle of black death”, offers Savage – “Savage is my name because Savage is how I feel when the radio wakes me up with the words ‘suspected gunman’”. Whilst the themes are unambiguously political, it never comes across as preachy or clichéd, and doesn’t fall into the same traps that so many political bands, for example, Cabbage, do.

Even the weaker tracks on Wide Awake! rank amongst Parquet Courts’ best. Closer ‘Tenderness’ has a jerky rhythm which evokes Talking Heads, with some great lines like “like a junkie going cold, I need a fix of your tenderness”, and ‘Before The Water Gets Too High’ has themes of global warming and tinny machine drums.

The whole album is also produced beautifully. Parquet Courts’ decision to enlist Danger Mouse has proven to be a wise one indeed. His production credits include the likes of Gorillaz, Red Hot Chili Peppers and The Black Keys to name a few, and he’s gotten the best out of those bands by encouraging them simply to sound like themselves. Here, he’s allowed the Brooklynites to expand their sound in terms of overall elements without compromising their identity – there are probably more keyboard and synthesiser parts on this album than all of their previous albums put together. The intricate production details make Wide Awake! feel like a fresh page for Parquet Courts. Whilst Human Performance was an amazing album, it didn’t have the depth of Wide Awake! Subtle synth tones rise and fall throughout songs like ‘Total Football’, punctuating the rabid guitar and pummelling drums.

Although Parquet Court’s signature sound has been left mostly intact, it is clear they have been taking influences from a wider variety of sources than before. The single ‘Wide Awake’ was an early indication of this. Possibly the funkiest song the band have ever done, grooving cowbells and clicky percussion winding through the instrumental. Parquet Courts have always had an interest in hip-hop, collaborating with rapper Bun B on ‘Captive Of The Sun’ from Human Performance, and country music too, evidenced on Andrew Savage’s solo album last year, Thawing Dawn. This is present throughout the album, especially on ‘Freebird II’. Organs and jangling guitars twang away, with themes of regret and drug use.

Wide Awake! is the broadest, deepest, and quite simply the best album Parquet Courts have released so far. It is at once a world away from Light Up Gold, yet the Parquet Courts spirit still runs deep. The band has matured and developed and given the world the reflective mirror that the world of politically dormant punk needs. (8/10) (Louis Marlow)

Listen to Wide Awake! by Parquet Courts here via Spotify, and tell us what you think below!