REVIEW: No Age – ‘Snares Like A Haircut’ (Drag City) 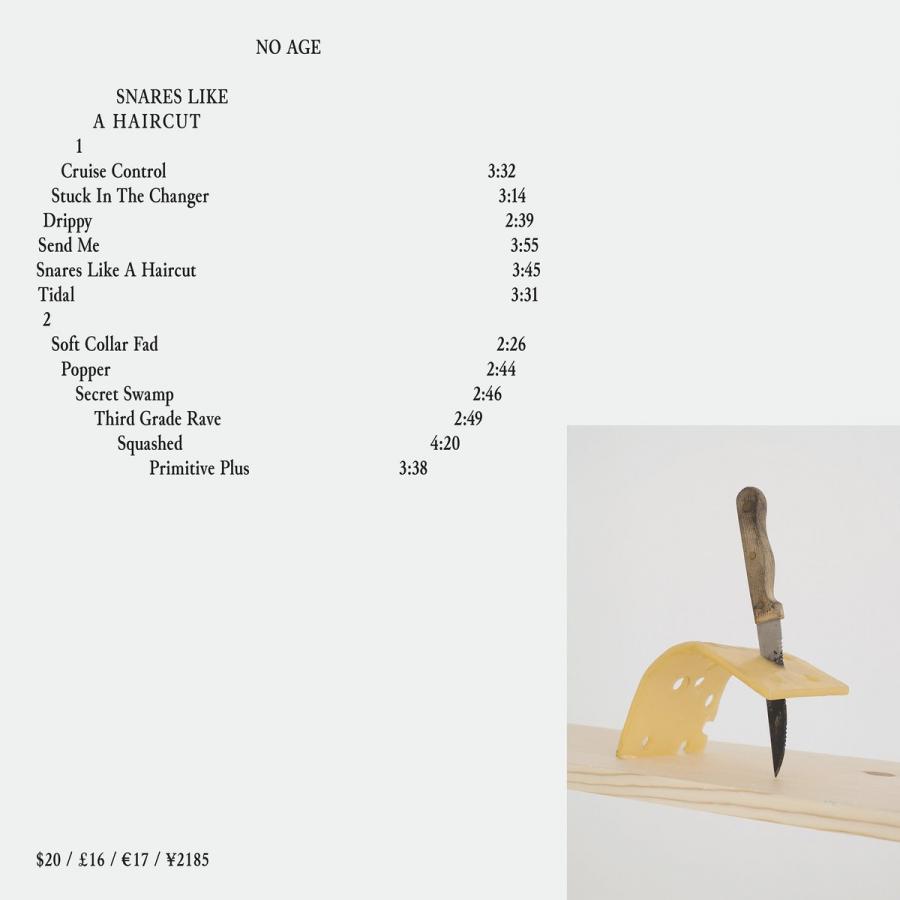 After a five-year break and having moved from Sub Pop to Drag City, L.A.-based garage-rock duo No Age remind everyone of their talents with fifth album ‘Snares Like A Haircut’.

After what has felt like an eternity of inactivity, and a period that has seen alternative shift significantly around them, Californian garage/noise-rock duo No Age are back with their fifth full-length album Snares Like A Haircut. What is immediately astonishing is how this album sounds right from the get-go. The production, when compared with earlier works like singles collection Weirdo Rippers and 2008’s debut proper Nouns, has never sounded as synchronised with the band’s unrestrained guise than as now.

As ever, obvious influences that inform No Age’s sound the most are the late ‘80s indie-rock era (Sonic Youth and Dinosaur Jr. spring to mind). Rough and jagged guitar effects, plus the somewhat tongue-in-cheek lyricism, effervesce throughout the album. In addition, No Age have left their previous label Sub Pop, the trademark of their three previous albums, and are now signed with Drag City, the same record label as famed garage rock multi-instrumentalist Ty Segall, which seems rather fitting.

In terms of track composition, Snares Like A Haircut is precisely what the listener would expect from a No Age album. A good selection of fast-paced and dynamic songs with the subtle inclusion of a few resting, but no less stimulating, instrumentals. But the penultimate track ‘Squashed’ strongly delineates from both these characteristics as Dean Allen Spunt’s drums are more lissom than usual. However, it is the background reverb which binds the song together devotedly. Opening track ‘Cruise Control’ derives straight from the No Age manual and a scintillating initiation to a more mature production. It is plain as day that Spunt and bandmate Randy Randall, after 13 years in the music industry, have found their raison d’etre, if you will. ‘Send Me’ entails a leisurelier atmosphere that idolises laconic Pavement-like guitar chord progressions.

Although song order is not always essential for an album to be brilliant, it is certainly a driving factor for this album’s palatability. No Age do the right thing by beginning resilient and leave the most tranquil songs till last. But for a lot of LPs, it’s predominantly mid-album where bands slip up because of a lack of prolonged interest. On Snares Like A Haircut, No Age provide a trio of songs that are as explosive as fireworks on Bonfire Night to fill this void: ‘Tidal’, ‘Soft Collar Fad’ and ‘Popper’. In addition, it is here that elements of punk seep into their music with an allusion of Buzzcocks emulating the duo (which is odd, considering they come from very different punk traditions).

The first and self-titled instrumental highlights another side to No Age’s musical talents, which their rock duo counterparts don’t really cogitate over. The lo-fi ambience of ‘Snares Like A Haircut’ sounds professional in its making as the atmospheric score benevolently undulates through the listener’s ears. ‘Third Grade Rave’ is more variable instrumentation-wise with Spunt providing a memorable drum beat and Randall’s guitar notes are very elegant and more-ish.

Snares Like A Haircut is without a doubt No Age’s finest hour thus far – the acme point in their career, if you will. It is undeniable that rock music is struggling to adapt to trends in the music business and its myriad consumers. But ever so slightly, groups like No Age are looking out for said consumers and helping to set the scene for the genre with other rock duos like Royal Blood, for example. (8/10) (Harry Beynon)

Snares Like A Haircut by No Age can currently be found on Apple Music, but not Spotify. Tell us what you think of the album below!