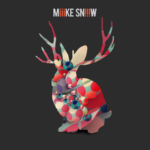 Following a three-year hiatus, Miike Snow return with their third album, imaginatively titled iii. Their 2009 self-titled debut featured hit record ‘Animal’ and it’s perhaps no surprise that the single became such a big success, with its bouncy hybrid of electro and indie. The trio is made up of Swedish production duo, Christian Karlsson and Pontus Winnberg, alongside lead vocalist Andrew Wyatt. Karlsson and Winberg’s credits read as a who’s who of the music industry, including Katy Perry, Kylie, Madonna, Britney Spears, amongst many more.

Whilst their debut took a minimalist electronic approach, their 2012 follow-up Happy To You saw Miike Snow delve into a greater mainstream pop soundscape – perhaps no surprise considering the band’s production credentials. It’s much of the same on iii in which the trio bring in a number of guest vocalists, including Charli XCX and Run The Jewels, in an attempt to further storm the barricades of the mainstream. Album opener ‘My Trigger’ provides an insight into the album as a whole, with hints of Maroon 5 combined with cut-ups of soul samples with distinct piano undertones with playful vocal effects. Essentially, the production tricks are identical to those of their second record.

‘The Heart Of Me’ and new single ‘Genghis Khan’ throw Miike Snow head first into the commercial pop world. Powerful synths make this album much warmer than their debut and this is perfectly executed on ‘For U’ which features Charli XCX. ‘Heart Is Full’ features overdubbed soul samples from Marlena Shaw’s classic, ‘Waiting For Charlie To Come Home’, and combines soul with rap to great effect. It’s the second half of the album which is much more interesting. ‘Lonely Life’ harks back to the sophisticated, MGMT-style pop from their debut. This is perhaps the only point on the record in which Miike Snow opt for the minimalist pop approach and puts Andrew Wyatt in the spotlight. The album ends with a remixed version of ‘Heart Is Full’, which features prestigious hip-hop powerhouse Run The Jewels, and add a heavier rap influence over the original.

Whilst this is a distinctly diverse record, it feels fairly contrived, unlike their debut which made Miike Snow different to any other outfit at the time. It’s certainly not all mediocre by any means. There’s a number of clever soul interludes, intertwined with the silky production skills of Karlsson and Winberg. iii album reflects a band who have developed and are using their creativity and experience to their disposal. The first half of the record feels a little ‘Maroon 5 heavy’, but the second half is more creatively interesting and makes for a fun listen. (6/10)

Listen to iii here, and tell us what you think below!