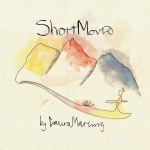 Following her resplendent fourth album Once I Was An Eagle, which was our second highest-ranked album of 2013 and had critics drawing breathless (and justified) comparisons with the great Joni Mitchell, British alt-folk heroine Laura Marling was suffering from exhaustion. Dissatisfied with the initial batch of songs she wrote in the aftermath, she recharged her batteries in Los Angeles by travelling, meeting people and accumulating experiences and stories, and even holding down a regular bills-paying job in a coffee shop for a couple of months. Finally inspired to pick up the guitar again, Short Movie is the result, which adds even more colour and texture to her palate, most notably with the presence of electric guitar.

But this isn’t simply ‘Marling goes electric’. If we may be permitted to use the easy Mitchell comparison once more, Short Movie is her Hejira travelogue moment, imbued with a sense of drifting reinforced by Marling’s willingness to temporarily loosen herself from song structures in the pursuit of getting her feelings across. Previously, she’s always sounded a bit alienated by the sensation of impermanence in her lifestyle – on Short Movie, she embraces it, or at least sounds at peace with it. Even on the standard-Marling acoustic numbers, the atmosphere just feels brighter and airier than the occasionally oppressive Once I Was An Eagle.

Marling begins in acoustic territory with opener ‘Warrior’, creating a mystical and distinctly American atmosphere with washes of cymbal. On ‘Howl’, she pulls the simple trick of electrifying an ostensibly folk-ist song, and the result is absolutely mesmerising; ‘Don’t Let Me Bring You Down’ rails against the falseness of Californian ‘have a nice day’ optimism, demonstrating her total understanding of the interplay between rock and folk. The title track begins with the lightest touches of electric guitar plucks and builds into a thrilling tornado of a finale, boosted by a string section that she insisted play blind (i.e. without sheet music). Marling switches seamlessly between folk and electric from track to track – take the moody ‘False Hope’, where she plays the electric guitar with the kind of brio you’d expect from PJ Harvey or Anna Calvi, followed by the acoustic ‘I Feel Your Love’, which channels a shamanic vibe reminiscent of Happy/Sad­-era Tim Buckley.

Despite the slight change in sound, familiar Marling themes are still to be found in Short Movie. She rejects the notion that she must be a man’s rock on ‘Warrior’ (“I cannot protect you from who you want to be”). She warns boys not to fall in love with her on the semi-spoken-word ‘Strange’, explaining disdainfully “should you fall in love with me, your love becomes my responsibility and I can never do you wrong. Do you know how hard that is?”. She prescribes feminine strength on ‘Gurdjieff’s Daughter’, pleading “keep those eyes wide / don’t be impressed by strong personalities”. All of these are subjects running back at least to her record, 2010’s I Speak Because I Can. On the latter song, she uses her voice as the instrument while her guitar serves to provide a backdrop, a deeper exploration of the territory she had begun to break on her last album.

Short Movie is a second all-time classic in a row from Marling, though a very different one from the distinctly English Once I Was An Eagle. It’s a distinctly American record, born of ennui but ultimately sounding restful, and consistently executed at the highest standards. To be such an accomplished songwriter, storyteller and musician at the mere age of 25 is a truly astonishing achievement. We’re more than happy to repeat what we said in 2013 – it is high time we considered Laura Marling worthy of a place in the pantheon of all-time great songwriters. The really interesting question is: just how much better can she get? (9/10)