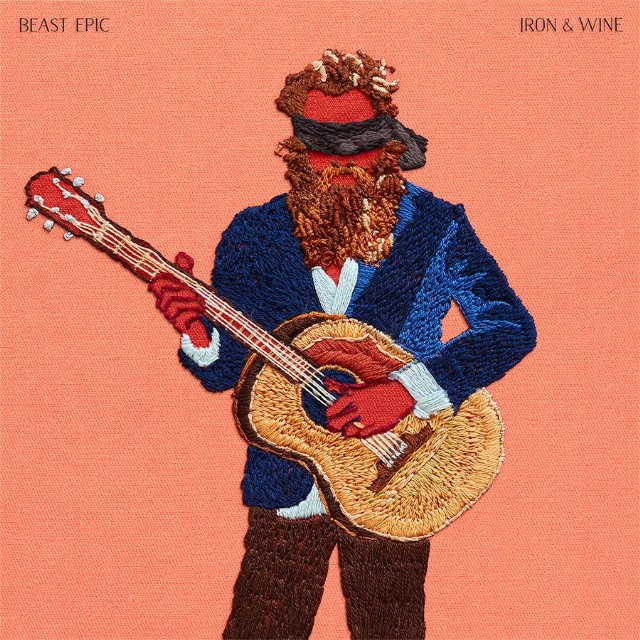 Sam Beam’s sixth Iron & Wine album ‘Beast Epic’ sticks very closely to the same formula that’s made him such a celebrated figure in the indie/folk scene for so many years.

Sam Beam’s newest Iron & Wine LP should be recommended to listeners who have been seeking an excuse for a moment of quiet contemplation. On Beast Epic, the time seems to flow at a different pace than it usually does. The lingering quality of Beam’s songwriting, as well as the warmth which his music produces, has a chance of gaining plenty of new followers, and for sure will delight those who are already familiar with his amiable and gentle style of writing.

On his sixth studio album, Beam finds just the right way of converting his ideas into short musical stories, something that he’s been well known to do. They are full of colourful metaphors, some more sombre than others, but each of them comes to life in its own way. One of many good examples can be found on the melancholic ‘Summer Clouds’ where Beam sings in a contemplative way: “by the end we leave somewhere too long to ever wander back / by the end we give someone too much to ever close the hand”.

Beam’s pleasant voice puts his own words at ease, which then do the same to the person listening to his music. He presents an emotional and tender collection of songs, which are also poetic and often very moving. ‘Call It Dreaming’ is one of the most beautiful tracks on the album, partially due to the rich instrumentation which was used in the song. The arrangement consisting of acoustic guitar, piano, cello and drums, yet it doesn’t feel like it’s too much; the song’s unhurried melody and honest lyrics, such as “for all the love you’ve left behind / you can have mine”, seem effortless and genuine.

On ‘Bitter Truth’, Beam turns to the past. He sings “I was sorry then / I’m not now” in an emotional way, reflecting on an intense experience when “I kept reading hidden meanings / you would rage how I was wrong” only to finish in a truly bitter way, “you better love yourself, cause I’ve tried”. Beam’s likeness of representing the visual stuff can also be easily spotted on the album. ‘Last Night’ is the best example of such approach to writing and composition; Beam creates an eclectic and immersive scenery, with different sound effects which build an intriguing setting, of the “last night to lie in these arms”.

Sam Beam’s latest release stays very close to the rustic and folk influences that have served him so well for nearly 20 years, which, as it appears, makes Iron & Wine sound not only pleasant but also authentic. Beast Epic may be soft and largely based on simplicity of acoustic music, but it doesn’t take away anything from the quality of the album. Beam’s lyrical abilities are very much on point and create a picturesque experience, which is not for everyone, but definitely for those who need a steady beat to calm down to. (7/10) (Alicja Rutkowska)

Listen to Beast Epic here via Spotify, and tell us what you think below!