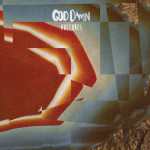 Highly acclaimed by Kerrang! magazine and backed by a fiercely devoted fanbase in their hometown of Wolverhampton, the ferociously loud duo God Damn unleash their debut album after three years of admirably hard work. Taking their cues from classic heavy rock and indie influences ranging from Nirvana to Neutral Milk Hotel, their powerful yet complex sound is all the more impressive when you consider they’re just a guitarist/vocalist and a drummer. Vultures not only lives up to the expectations of their fanbase (which surely must grow much larger as a result) but also puts up a convincing argument for being the best debut album of 2015 so far.

Several of their songs have twisted, gothic structures that lead the listener down one path before branching off in a different direction, ending in a completely different place to where you thought it would at the start. For instance, the frenetic intro of the title track (and new single) that mutates into the ghostly main body of the song itself shows that the guitar music still has original ground left to cover, in terms of how different disciplines relate to each other. The creepy acoustic opening of ‘Skeletons’, with Thom Edwards’ voice sounding like it’s coming from the mouth of a mannequin, eventually erupts a third of the way through its 9-minute length, only to retract and explode once more. The fuzzy drone of ‘Silver Spooned’ lunges impatiently from one pace and focus to another, and the ultra-heavy rhythmic chassis of ‘We Don’t Like You’ provides a great foundation for some serious sneering from Edwards before some quiet pauses for dramatic effect. And quite how a two-piece band managed to make something as intricate and downright fucking loud as ‘Horus’ is a marvel of production.

In this way, Vultures occasionally resembles a beefed-up, angrier version of Slint’s magnificent Spiderland, one of the sacred touchstones of alternative rock. But even when God Damn dedicate themselves to one idea per track, they’re refreshingly straightforward about their intentions. Opener proper ‘When The Wind Blows’, with Edwards’ razor-sharp post-hardcore shriek, and the straight-ahead thrash of ‘By The Wayside’ are great examples of this. ‘Maladie Melodie’ takes a rather more conventional approach in comparison to the rest of the album’s punk / post-hardcore vibe, with some pretty classic rock riffage taking place. It shows a versatility in their execution which bodes very well for the future, that they can ‘do’ complicated and simple within one full-length record and make it hang together so well.

Quite apart from the variety and technical virtuosity on display, Thom Edward’s masterful rock voice is one of the main attractions of God Damn, capable of conveying great feeling both at full volume and at little more than a haunting whisper. This leads us to our one and only complaint about Vultures, which is that his voice is often placed at the back of the mix so that it’s another instrument, masked and sometimes incomprehensible, and it’s strange that the band should underplay such a major asset. Aside from this, it’s a compelling, varied and accomplished debut from an immensely talented band, not to mention a total thrill-ride to boot. (8/10)