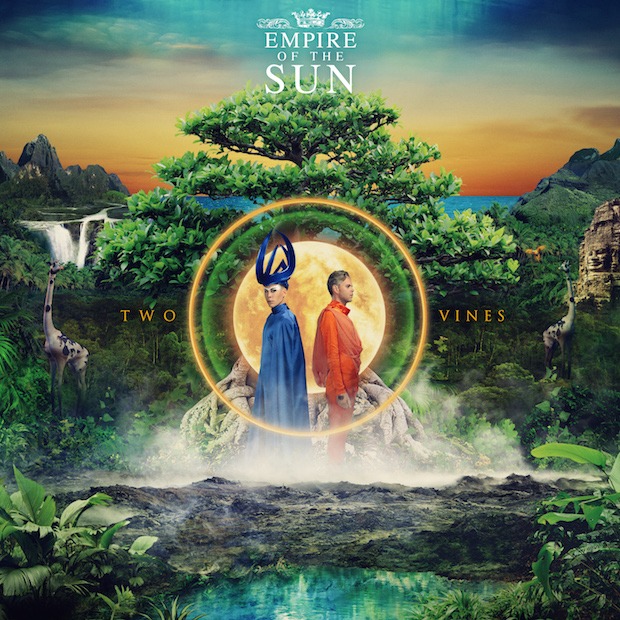 ‘Two Vines’ is just about enough to reinstate Empire Of The Sun at the forefront of our minds – however, it’s doubtful they’ll remain there for long.

Often characterised by their distinct pop/indie hybrid aesthetic, Luke Steele and Nick Littlemore have long proven their ability in satisfying the appetite of an unusually varied audience. After arriving flamboyantly on scene in 2008, their debut We Are The People quickly generated the interest of riff and beat lovers alike whilst their vibrant stage shows ensnared the remaining few. Although the Australian duo are able to continue shamelessly riding the wave of previous achievements, their third album comes bearing the baggage of a band who need something fresh to rekindle our waning interests.

Despite the space fillers that clog up the potential workings of their previous two records, Empire Of The Sun have always succeeded in writing instantly memorable singles. Whilst debut classics ‘We Are The People’ and ‘Walking On A Dream’ provided an immediate leg up to a position of endless radio play, and then ‘Alive’ reinstating the hype five years later, their new record Two Vines is noticeably absent of any defining standouts. Though undeniably catchy, supposed lead single ‘High And Low’ lacks the authenticity of previous ventures and shows very little individual character when placed in the mix of the album’s remaining content. In fact, it sounds so similar to opening track, ‘Before’, that each practically sound indistinguishable through identical tempo and beat arrangements.

Looking past the generic qualities, there is a little more substance to indulge upon. In a press release, Littlemore reveals their inspiration drawn from an “image of a modern city overtaken by jungle, almost like mother nature taking back the planet”. However their efforts in writing a thought provoking concept album is tarnished by a handful of poorly written ballads and an excessive use of Auto Tune. To make matters worse, the entire album is a jumble of vacuous, inspirational clichés through lyrics that practically regurgitate the words of that person who keeps clogging up your news feed with infuriating motivational life quotes. ‘Ride’ has the potential of a Daft Punk inspired classic but immediately leaves you feeling sick in stomach with calls of “together we can / together we can do it”. Not listening to anything like that we can’t.

Although their intentions may have been firmly in the right place, Empire Of The Sun just haven’t quite pulled it off this time round. Despite the glistening synth pop that we all first locked eyes with still being undoubtedly present, there’s simply not enough quality material to celebrate in the long run. Two Vines is just about enough to reinstate Empire Of The Sun at the forefront of our minds – however, it’s doubtful they’ll remain there for long. (5/10) (Ollie Rankine)

Listen to Two Vines here via Spotify, and tell us what you think below!